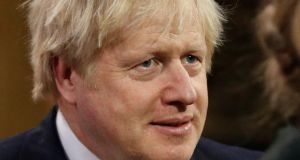 UK prime minister Boris Johnson at the Houses of Parliament on Thursday: Johnson will face a huge wave of pressure from UK businesses to do a decent deal with the EU. Photograph: Adrian Dennis/WPA Pool/Getty Images

The remarkable thing about 2019 has been the resilience of the economy to the threats it faces – notably Brexit. Right up to November, and well past the delivery of Paschal Donohoe’s budget for 2020, there were real fears of a no-deal Brexit at the end of January.

Yet while this is reflected in confidence indicators – and has had some impact in areas like house prices and investment – all the signs are that the economy has kept on trucking. Probably the best indicator is the growth in the number of people at work – which up to the third quarter was rising by about 1,000 a week.

Some of this is not surprising – after all, growth is being driven in part by multinational investment which is not particularly exposed to the Brexit threat. But the impact of uncertainty on the behaviour of households was less than might have been anticipated. In particular, encouraged in many cases by rising incomes, consumer spending is rising by well over 3 per cent a year.

The one area where the Brexit impact was more noticeable was investment. The overall investment figure for the economy is rising strongly, but this is largely due to higher construction spending – and some multinational accounting factors. Investment outside construction by Irish businesses has fallen off a bit – though may now rebound with the January 2020 risk removed.

National economic data is affected by multinational accounting now more than ever. A measure developed by Goodbody stockbrokers to estimate the underlying growth in the domestic economy shows it is rising by more than 3 per cent per annum. This is well below headline GDP growth of 6 per cent but still well ahead of most other countries.

Of course the strategy of carrying on and ignoring Brexit has turned out to be precisely the correct one for those who did it. The cliff-edge threat for January 2020 is now off the table. And while a new cliff edge may well appear at the end of December next year – the deadline for a new trade deal to be done – expert opinion is divided on how this will all play out.

Some see UK prime minister Boris Johnson making concessions to the European Union to get a basic trade deal in goods over the line by the end of 2020, inevitably edging towards a softer, less damaging Brexit. Others see the United Kingdom now setting off on a course of divergence from the EU, allowing for a less favourable initial deal with the EU and more significant economic damage. Or even threatening that new December 2020 cliff edge.

We will have to watch the pointers moving into 2020. Johnson will face a huge wave of pressure from UK businesses to do a decent deal with the EU. But Brexit is a political project rather than an economic one. It would still seem unwise to presume that it will all now somehow be okay and that we will head towards a less damaging Brexit. At very least, another year of uncertainty on this key economic issue for Ireland lies ahead. The danger has been pushed out, but it has not gone.

The other issue which will come to a boil next year is international tax reform, where a process led by the Organisation for Economic Co-operation and Development (OECD) has reached a crunch stage. This will take some hit on our corporate tax revenues – though this is now growing so rapidly that judging how serious this will be is very difficult. But the more fundamental issue is the proposed setting of a minimum corporate tax rate and the risk this poses to Ireland’s use of our low tax rate to attract companies to invest here.

Next year could feel a lot like 2019: an economy ticking along when debate is dominated by Brexit and its political and economic consequences. And, of course, a general election

A lot will come down to whether agreement is reached on this part of the reform programme and what the detail of it is. But as broadcaster George Hamilton would say when a striker from another country approaches the Irish goal: “Danger here.” If Brexit is the threat to our domestic economy, this is the key issue for multinationals. And it is one where Ireland is now sharply on the defensive and operating without the “veto” we have at EU level. At the OECD we can say “no”, but everyone else will shrug their shoulders and press on regardless.

These two big factors will dominate a lot of discussion in the early part of next year. But the lesson of 2019 is that growth now has a momentum which can carry on regardless. Of course if some of the risks turn into reality, we have seen how growth here can turn very quickly – how the Irish economy can operate like a bit of a roller-coaster. At least now, unlike 2008, we don’t have a huge exposure in household or corporate debt if some of the shocks do hit over the next few years.

Trying to move off that roller-coaster – or at least make the ups and downs less sharp – is a key issue for policy. And now sustainability is entering the equation in a big way too, threatening at least some of our traditional economic philosophy of chasing growth and investment almost at all cost.

Next year could feel a lot like the one just ending. An economy ticking along in the background when debate is dominated by Brexit and its political and economic consequences. And, of course, a general election. It will be a strange campaign, with the Government playing up the positives on the overall economy and the Opposition focusing on the problems in areas like health and housing.

Fine Gael would do well to remember that “Keep the recovery going” was a slogan that didn’t work too well last time. And all sides should take note that there are threats out there which haven’t gone away and that there is only so much any Irish government can do when faced with international risks.