Una Mullally: With the end of Le Galaxie, the glow has gone out of Irish music 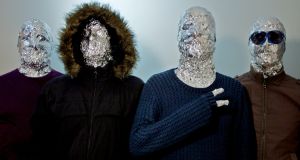 Le Galaxie: Their live shows acted as a pressure valve for a generation under incredible strain

“Hello friends, it’s time to say goodbye. We’ve completed LE GALAXIE. It’s been a true pleasure to spend the last decade with you all. Thank you from the bottom of our hearts! Lots of love. Gotta go x.”

Last week, the Irish band Le Galaxie signed off with a tweet accompanied by a snippet of their 2012 track Gotta Go from their EP Fade 2 Forever. The announcement was uncharacteristically low-key, especially coming from a band that used to end its live shows with the theme from Jurassic Park. It is the end of an era, not just for a band, but for the time they existed in.

“The unfortunate reality is that life in a band these days is one of extreme highs and extreme lows,” the band wrote in a statement explaining their end. “There’s the elation after an amazing gig to the pressure of mounting bills, the pride of releasing music that you’ve laboured over for months to the deflation of struggling ticket sales. It’s all in there and a band needs a lot of fuel in its tank to get through it. Some bands have more fuel than others and unfortunately, the day arrived where our fuel ran out.”

Bands break up for all sorts of reasons. The band dynamic is a complex, intense, demanding, multi-way relationship placed under the constant strains of creative processes, creative differences, confined spaces, disconnection from place, family, partners and friends, poverty, clashing egos, the discombobulating stress of touring, exploitation, and the often destructive attempts at balancing the adrenaline high of live performance with the ensuing comedown.

On Monday you lost your job, and on Saturday you were catching Le Galaxie’s glowsticks flung into the crowd

The financial margins at most levels – bar the top tiers – of the modern music industry range from precarious to impossible. The creative, personal and financial investment – not to mention time – that is required to craft a song or an album is huge, and radically off-balance with the audience’s consumption habits. Hunter S Thompson’s assertion – “The music business is a cruel and shallow money trench, a long plastic hallway where thieves and pimps run free, and good men die like dogs. There’s also a negative side” – remains true to some ways. Frame the darkness within the industry as something you can navigate, survive and excel in, and the rewards are there, if you can cope with them.

Le Galaxie emerged from the much more earnest 66e, and their debut album, Laserdisc Nights II, was released in 2011, in the depths of the recession. Before and after that, their live shows acted as a pressure valve for a generation under incredible strain. While “going away drinks” formed a considerable part of the social lives of people in their 20s and 30s, whose peer groups were disappearing to London, Canada, Australia, and Berlin, Le Galaxie’s gigs were an exercise in pausing reality. The misery and dourness of the recession created an undercurrent of hedonism and desire for relief and release. On Monday you lost your job, and on Saturday you were catching Le Galaxie’s glowsticks flung from a suitcase into the crowd.

My friends and I went to Le Galaxie shows to forget what was happening around us. I couldn’t begin to count the number of people I danced with at their shows who no longer live here. Their festival shows were famous for guaranteeing a good time. But strip away the high-octane stage performances and concert in-jokes of waving signs declaring “TUNE” along with those glowsticks, and you’re left with the music. With their subsequent albums, Le Club and Pleasure, Le Galaxie reached for and achieved something many artists spend a lifetime attempting: they found their own voice, their own sound, their own aesthetic, their own tone. Like most contemporary art, it was deeply and delightfully referential, and it was also sophisticated, fun, serious, and really quite brilliant. They will always be another band that could and should have been huge, but stars tend to scatter as much as they align.

The queer community, especially, responded to Le Galaxie’s sweaty group hug. In them, we found kindred spirits as a community well used to working out our tensions and relieving the daily grind on dancefloors. The band threw themselves into the marriage equality movement, including playing an epic fundraising party at the Academy in Dublin called Love System, more than a year before the referendum.

Le Galaxie often said that their band would not exist without Fight Like Apes, the groundbreaking and stage-trashing band led by the artist MayKay, which turned the Irish music scene on its head. It made sense then, that in their orbit of guest vocalists (such as the brilliant Elaine Mai), that MayKay eventually became a fully fledged member of the band, as Le Galaxie doubled down on magnetic front-leadership.

In some ways, bands are an exercise in hope. They are an exercise in living differently. Anyone can “get a job”. It takes a much more ambitious, enlivened and resilient spirit to be an artist. To live an artistic and genuinely creative (not faux-creative as in the advertising and tech industries’ endless attempts at kidnapping the word) life is often seen by those unfamiliar with such pursuits as juvenile, trivial, mockable, reckless. That’s probably because leading an artistic life is also a threat. It threatens conventions, capitalism and conservatism. It prioritises expression over economics, and creativity over capital. Bands, and the eras within which they exist, end, but the art is the real residue, along with the glorious attempt to create it.