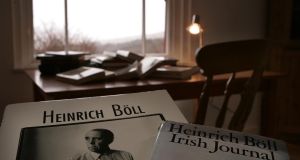 Heinrich Böll’s Irisches Tagebuch (Irish Journal), a eulogy to Ireland in the 1950s that, in the decades since, may have sent 10,000 German tourists here for each of its 100 pages. Photograph: Dara Mac Dónaill

Everybody knows about Heinrich Böll’s Irisches Tagebuch (Irish Journal), a eulogy to Ireland in the 1950s that, in the decades since, may have sent 10,000 German tourists here for each of its 100 pages.

Hardly anyone, by contrast, has heard of Richard Bermann’s Irland (Ireland), published more than 40 years earlier, although it was in the same language, and is also of high literary merit.

In part the obscurity of Bermann’s book is the result of catastrophically bad timing. It was inspired by a visit during the summer of 1913, when Ireland was on the brink of Home Rule. Apart from assuming this would take effect imminently, the Vienna-born author’s mistakes also included his more general belief that “we live in a tame era”.

The era was about to contradict him violently, so that by the time his book appeared, there was no appetite in German-speaking Europe for travel literature from the UK.

And that’s the other way in which Bermann’s account differed from Böll’s. He was not nearly so much in love with Ireland. On the contrary, it was his interest in England, of which he considered Ireland a thoroughly assimilated subset, that brought him here.

At most, he thought Home Rule Ireland would offer a “colourful variant of Britishness [. . .] a Britishness with a bit of music”. That’s what the 1916 leaders feared too. But what the war in Europe didn’t do for his sales the Rising did. Rarely has an author ended up so far on the wrong side of history so soon.

The only reason I have heard of Bermann’s book, is that it features in an essay from the latest annual Tipperary Historical Journal, out now.

Written by Joachim Fischer, a Tipperary-resident academic at the Centre for German Irish Studies (CGIS) in Limerick, the essay centres on one small episode of the book, which as well as having local resonance – Fischer’s subtitle is “Why Richard Bermann never went to Killaloe” – encapsulates the whole.

Bermann came very close to visiting Killaloe, the ancient Clare village and birthplace of Brian Boru. He got as far as Ballina, its twin town, on the opposite side of the Shannon. And he and a companion did intend to cross the bridge.

But that was before they enjoyed a fine dinner, followed by whiskey, as they watched the sunset from the veranda of their hotel, which had been built by and for wealthy English tourists.

As Bermann justified it to his companion: “On this beautiful evening I do not want to believe that Killaloe is just another miserable little Irish provincial one-horse town consisting of dust and historical pretensions; it must still be the old royal city on the Shannon, sad because the kings are dead, gone like these pretensions but still royal. This is the way Irish emigrants might see Ireland when on dark summer evenings they cast their eyes homewards across the ocean [. . .] The Shannon makes the mists rise; they shroud Killaloe and probably know exactly what they are doing.”

Failure of his Ireland book notwithstanding, Bermann went on to achieve success as a journalist and travel writer, reporting from more exotic places, until his Jewishness forced him to flee the Nazis and he died in US exile.

But his ill-timed debut was praised by Hermann Hesse, among others. And as Gisela Holfter, joint director of the CGIS, said earlier this year when recommending a long overdue English translation (now in progress): “Bermann was an excellent writer, a keen chronicler of cultural and political absurdities [in] the globalising world”.

His cynicism may, Fischer suggests, have been that of a disappointed romantic. Bermann compares Ireland at one point to Kyffhäuser, the mountain where the German folk hero, Emperor Frederick Barbarossa (1122-1190) was said to be sleeping until one day when the ravens stopped circling and he and his knights would wake to restore Germany’s greatness.

“All Ireland is a Kyffhäuser, the ravens are circling,” wrote Bermann. “Only Thos. Cook [Thomas Cook, the English travel agents] will shush them away.”

He did not live to see the wave of German tourists – raven-scattering or otherwise – that Böll’s journal unleashed from the late 1950s on. That book may have been the Killaloe to Bermann’s Ballina, although it was wars and revolution that separated them, rather than a bridge. Even so, I look forward to having both on my shelf when the translation of the 1913 work finally appears. They should make for interesting, if odd, companions.