Moscow braces for surge in anti-Russian rhetoric after Biden win 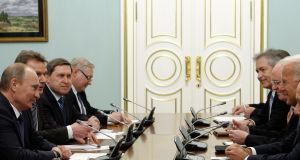 Then Russian prime minister Vladimir Putin and US vice-president Joe Biden with their delegations at a meeting in Moscow in 2011. Photograph: Alexey Druzhinin/AFP via Getty Images

When Donald Trump won the White House in 2016, Russian MPs literally popped Champagne corks in parliament at the thought of a US president full of praise for Moscow. Four years of disappointment later, Joe Biden’s victory has more likely seen them drowning their sorrows.

After a term marked by more US sanctions, torn-up bilateral treaties and spiralling relations, Moscow had little enthusiasm for either more of the same or the harsh anti-Russian rhetoric of his Democratic party challenger. And while some officials believe a new administration at least represents the potential for change, few have any short-term hopes for relations at a historical nadir.

“Biden . . . will certainly change the style of US foreign policy but will hardly be able or willing to reverse some of its key trends,” said Dmitry Trenin, director of the Carnegie Moscow Center. “Confrontation with Russia will continue.”

By Sunday evening in Moscow, the Kremlin had yet to send a public message to the US president-elect on his victory.

Moscow is braced for a renewed surge of anti-Russian rhetoric from Washington in the early days of a Biden administration, and is nervous about bills currently in Congress that could dramatically increase the impact of sanctions against the country, spearheaded by a new president with no equivocation in his disdain for Vladimir Putin’s regime.

Biden has vowed to harden Washington’s stance against Moscow, seeking to counter Russian aggression by reaffirming US involvement in Nato and putting human rights and a new anti-corruption drive at the forefront of his foreign policy as part of an explicit bid to face off against the Kremlin.

“We must impose real costs on Russia for its violations of international norms and stand with Russian civil society, which has bravely stood up time and again against President Vladimir Putin’s kleptocratic authoritarian system,” the president-elect wrote in an article this spring.

“Putin wants to tell himself, and anyone else he can dupe into believing him, that the liberal idea is ‘obsolete’. But he does so because he is afraid of its power,” he wrote, arguing the Kremlin feared a strong Nato, which he described as “the most effective political-military alliance in modern history”.

While European officials hope Biden will soften America’s tone with traditional allies, senior western officials in the US capital are braced for an abrasive change when it comes to US-Russia relations.

“We expect a massive toughening of the stance towards Russia,” a high-ranking western diplomat in Washington told the Financial Times. “There is a hatred for Russia amongst [Biden’s team] that is really amazing. It’s not just rational; it’s also very emotional.”

Biden is no stranger to the Kremlin. He first visited Moscow in 1979 as head of a congressional delegation. He was Barack Obama’s vice-president during the ill-fated and much derided attempt to “reset” bilateral relations in 2009, which preceded a souring of ties and the imposition of sanctions in 2014 after Russia’s annexation of Crimea.

Some Russian officials optimistically point to the expectation that Biden will usher in a more pragmatic and calculated US foreign policy after the disarray and chaos of Trump, presenting potential openings for co-operation in areas such as arms control, counter-terrorism and climate change.

Others refer to an absence of allegations of Russian meddling in last week’s election, in contrast to the 2016 vote where Moscow was accused of helping elect Trump – an issue that pervades mistrust of the Kremlin inside Mr Biden’s Democratic party.

“The departure of virtual ‘crimes’ from the agenda could partly switch attention to other topics. Not that we believe in a sobering-up in Washington, but at least the key irritant might go,” said Konstantin Kosachev, chairman of the foreign affairs committee in Russia’s upper house of parliament. “Not a bad pretext for resuming talks, for instance, over arms control. We are definitely ready.”

Ivan Timofeev, director of programmes at the Russian International Affairs Council said: “Biden will have greater leverage on talks and even compromises with Russia. The problem is that there are few reasons to make relations better.”

Hopes for better relations rely on a few specific areas where the Kremlin may find areas of targeted co-operation with a Biden administration.

While Biden’s full commitment to Nato, in contrast to Trump, represents a challenge to Moscow, Biden is likely to seek to reverse his predecessor’s decision to abandon global arms control treaties.

Biden’s team has said it would seek an extension of the New Start agreement with Russia, which caps the number of nuclear warheads held by both countries, but will expire little more than a fortnight after his January 20th inauguration. He may also seek a broader arms control negotiation.

Biden’s promise to bring the US back into the Paris climate pact would also provide a forum for negotiation with Russia, alongside the potential for a return to negotiations with Iran over a deal to curb its nuclear weapons programme – an agreement that Russia has continued to uphold even after Trump abandoned it.

“On balance I think a Biden presidency is more favourable for Russia, given both the opportunity for areas of co-operation and the likely more predictable nature of his administration in comparison to Mr Trump’s,” one western ambassador in Moscow told the FT.

“I suspect that Moscow in October had a deal on arms control that would be acceptable to Washington but chose to hold back suspecting that Mr Trump wasn’t going to win,” the ambassador added. “That could be back on the table now.”– Copyright The Financial Times Limited 2020