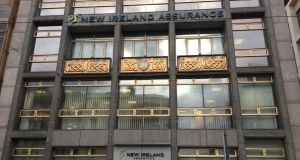 It’s usually true what Joni Mitchell said: that “you don’t know what you’ve got till it’s gone”. But passing the New Ireland Assurance HQ on Dublin’s Dawson Street recently, I stopped to study it properly for the first time and appreciate it while I still could.

The building is not quite gone, yet. And if it does go, it will not be to make way for a “parking lot”. Dawson Street real estate is far too valuable for that. Instead, according to this newspaper’s commercial property supplement, it’s likely to be replaced by a “higher-volume” office block.

Demolishing a 1960s modernist building is hardly a case of paving paradise, I know. But like paradise, the NIA office does have golden doors – in colour anyway – and very ornate ones at that, featuring Celtic crosses and symbols of the four (proud) provinces of Ireland.

Above the door, the Celtic theme is taken up in the decorative knots of three window panels. And without these extravagant touches, arguably, the building might be indistinguishable from many others of its era. As it is, the frontage is a dramatic mixture of the patriotic and the realist, reflecting the circumstances in which the company itself was founded 100 years ago.

You wouldn’t think to look at it now, but New Ireland Assurance has its origins in revolution. The founders had all been active in the 1916 Rising, and the project was conceived while they were studying at that third-level institution known as Frongoch Internment Camp, where one Michael Collins was among the consultants.

When the company was set up in early 1918, with offices on Bachelor’s Walk, there were suspicions it was a front for IRB money laundering. Certainly it was the subject of much police interest.

Reporting a 1920 raid on the house of Sinn Féin MP Michael Staines, The Irish Times noted that the latter was “a prominent official of the New Ireland Assurance Company, whose premises [...]were twice visited recently by the police”. Staines was not at home: he had heard the lorries approaching and fled. But the “visits” continued.

Despite this fraught business environment, NIA survived and thrived, becoming officially legitimate with independence and soon afterwards crossing the river to take up residence on Dublin’s southside. By the time the current building was opened in 1964, the founders had gone mainstream.

Among the guests then was this paper’s Irishman’s Diarist who described MW O’Reilly, Denis McCullough and the others as “soberly-suited, eminently respectable-looking elder statesmen of the business world”. The diary quoted an unnamed guest: “To look at them now, you’d never think they were virtually outlaws when they started”.

Another Bismarck quip, from 1888, was that sooner or later, a great European war would happen because of “some damn foolish thing in the Balkans”. He was right about that, at least, even if his own manoeuvring helped pave the path. The first World War in turn helped provoke the Easter Rising, so it could be considered a contributory factor to the setting up of NIA.

But among the countless indirect results of the same war was that “New Ireland” also became the name of an island in the South Pacific. And there is a rich irony in this. Now part of Papua New Guinea, the island doesn’t resemble Ireland in any way, except that it’s beside a larger island which, by the same logic, became New Britain.

Before it was New Ireland, though, the smaller territory was Neumecklenburg, a vestige of the 1880s when the archipelago was colonised by Germany. After the war, the islands were ceded to Australia, which renamed them. Thus it was that around the same time as the assurance company, a New Ireland also arose in the South Pacific, from what is still officially the Bismarck Archipelago.