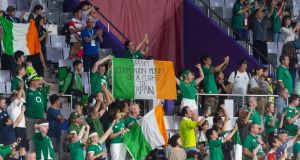 In early summer, knowing I would be at the Rugby World Cup in September, I took up Japanese too. By now, the suspicion arose that I might be developing a Duolingo problem. Photograph: Jayne Russell/Inpho

Hearing that the computer app Duolingo was a game-changer in language study, I decided last January that I would test it in 2019 by learning Italian. This was a random choice, based largely on Italian being completely new to me, with no baggage from previous failures, although of course it has much that is familiar.

Indeed, one of my favourite discoveries of the year has been that speakers of Irish-English use the same word for “very embarrassed” as Italians do for “dead”. In both languages, it’s “morto”. That probably says more about Ireland than Italy.

Anyway, encouraged by the Italian lessons and because Duolingo’s game-based format, using multiple-choice questions rather than rote-learning, is addictive, I decided in spring I would use the app to brush up on my French.

It was on a dark night in November, however, that I found myself hovering over the icon for 'Irish'

I had some baggage there, by contrast, having tried to learn that on and off for what seems like all my life. In fact, after bypassing the beginner’s option and taking a test so the app could judge my fluency, I was insulted at the level it placed me on.

On the plus side, it meant I could score Duolingo points from rusty French more easily than, say, while wrestling with the Italian Future Perfect tense. I even began to gain occasional promotions in the app’s randomly generated leagues – competing against strangers from around the world – which are utterly meaningless but compulsive.

Then, in early summer, knowing I would be at the Rugby World Cup in September, I took up Japanese too. By now, the suspicion arose that I might be developing a Duolingo problem.

I was in the “Gold” league already – the then highest level – having been promoted from Bronze and Silver. But Japanese was also fun, in a head-wrecking way. At current rates of progress, I may even be able to write a whole sentence of it by Christmas.

It was on a dark night in November, however, that I found myself hovering over the icon for “Irish”: a language I hadn’t seriously attempted for at least 35 years. I hadn’t hit rock-bottom in my Duolingo dependency yet.

But as it happens, I was struggling to avoid relegation from the “Obsidian” league, one of several new ones the app had since invented and placed spuriously higher than Gold.

That aside, I also had unfinished business with Irish. Sooner or later, it would have to be faced. I took a deep breath, clicked the icon, and sat another proficiency test.

There is much more gender fluidity in Irish lessons these days

This was like turning on a carousel at the airport. Suddenly there was baggage everywhere, some of it badly battered (that was the dative case, I think), and all of it vaguely familiar, but not familiar enough.

Despite the old feelings of guilt descending, I didn’t cheat. When I got to the end of the test, the app as usual faked excitement about how well I’d done. Then I saw the level it was placing me at and, in the non-Italian sense of the word, I was morto.

It was high infants again, basically. I was once more wrestling with sentences about small, implausible dramas involving dogs and cats. Typical of these was: “Briseann mo mhadra an leabhar”, which I had to translate. Excuses for not having your homework done have not gained in sophistication since the 1970s.

On the other hand, there is much more gender fluidity in Irish lessons these days. John may have a boyfriend now or Mary a girlfriend. And everyone is drinking wine, it seems, even the animals. Another of the sentences I had to translate in my first week of high infants was: “Ólann na madraí fíon”. That’s how the dog broke my book, obviously.

Once you get over the embarrassment, baby Irish can be fun too. My Italian course is fairly advanced now, by contrast, while even with multiple-choice answers, constructing simple sentences from Japanese characters is like doing a jigsaw in the dark.

After half an hour of that, Irish can be light relief. Starting again from a low level while half-knowing vast amounts also means you can accumulate app points with world-class rapidity. It feels like cheating, even if it wasn’t.

Not only did I avoid relegation from the Obsidian league, thanks mainly to Irish, I finished top of it last week, beating 49 strangers I will never meet again (take that, Haruki and Svetlana!) I’m now in the Diamond League, the new highest level. And as for my original goal, I hope to have finished the Italian course by New Year, unless my friends and family organise an intervention in the meantime.