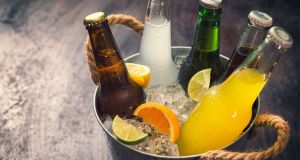 A friend recently was offered two bottles of non-alcoholic beer in a pint glass. “€9, please,” said the barman.

Here’s a game, beloved by me and probably hardly anyone else, that I play in various mini-marts throughout the South Kildare constituency.

I go in, as any decent person would do, to buy my copy of The Irish Times bright and early, just after cock-crow.

So far, so good. I pick up one Irish Times from the pile and then put another on top of the Irish Independents, just out of spite.

Then if we are not on a strict regime to prevent us getting even fatter, I may grab a Danish or a pecan pastry thing to share, you understand, later, when breakfast has faded.

Then I play the game.

“And half a dozen bottles of non-alcoholic beer, please,” I say at the checkout, bold as brass.

“I’m sorry, we aren’t allowed to sell alcohol before 11am”

This is when there is a pause and the small queue behind me starts to get restless.

It can go two ways now. The simple answer is for the shop assistant to say, correctly, that no-one had considered that non-alcoholic beer might actually be, eh, non-alcoholic and therefore as freely available to sell as Lucozade or bottled water, at any time day or night.

So they say, “I’m sorry, it is blocked by the computer”. As they used to say in Little Britain, “The computer says no”.

That’s fine, not their fault. I leave it at that.

But sometimes they say something clever like,”Well actually even non-alcoholic beer contains not more than 0.5 per cent alcohol (it says on the label). So it isn’t actually non-alcoholic.”

“Fair enough,” I say. “So you can’t sell anything containing alcohol at all, at all, before the witching hour?”

“Can I buy some vanilla essence?”

“Yes, it’s over there by the toothpaste.”

“But,” I say (drum roll),”that would be illegal. All those items contain more alcohol than non-alcoholic beer”.

There is a point to my nonsense, of course. I really don’t travel the country and find ways to irritate innocent shop assistants.

I am not teetotal but have a low tolerance for alcohol. And believe me it gets lower as you get older. A pint or a glass of wine is my comfortable limit these days, and as now it is frowned upon to drive half-cut (except in Kerry) I avoid drinking pretty much altogether when out and about.

But I would quite like a non-alcoholic pint after, say, playing golf, but often it isn’t available.

A friend recently was offered two bottles of non-alcoholic beer in a pint glass.

Decades ago we were staying with chums in Norway. They are Norwegian, that was their excuse. I developed a taste for a local beer, Hansa, and while studying it in detail noted that it came in three strengths in draught: 1 per cent, 3 per cent and 5 per cent.

The 1 per cent not only tasted like beer but I was told was broken down and used up by your body in an hour. So you could drink a pint (or metric equivalent) once an hour and not have to worry overmuch about the breathalyser.

My wish for this election is that a new government which is trying to discourage alcohol abuse and encourage safer driving should do three simple things.

One – not charge duty on non-alcoholic beer, and if they don’t charge at the moment then find out why it is so feckin’ expensive.

Three – let supermarkets sell non-alcoholic beer at eight in the morning so I can give up my game. It might start annoying people soon.

PS Mr Google says so, so it must be true.Ripe bananas 0.4 per cent, Soy sauce 2 per cent , Burger buns 1.28 per cent, and then there are fruit juices, fermented bread, etc.