Himself Portrait – Frank McNally on a quintessential Irish pronoun 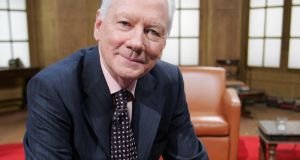 Among its definitions of the pronoun “himself”, the Oxford Dictionary Online notes a usage traditional in these parts and meaning “a third person of some importance, especially the master of the house”.

This is quoted approvingly by Fowler’s Dictionary of English Usage, which is either non-judgmental on the habit’s correctness or issues a plenary indulgence. “The delightful use of ‘himself’ to mean (as the ODO quaintly puts it) ‘a third person of some importance, especially the master of the house’) is mainly Irish”, Fowler notes, without further comment.

The phenomenon was remarked on again this week by Stephen Fry, in a statement on the death of Gay Byrne. Having appeared on Byrne’s programmes several times, Fry recalled: “Such was his standing in Ireland that I would be stopped on the street the next day with greetings like ‘Ah, I see you were on the show with Himself last night’ or ‘When will you be coming back to talk to Himself again?’”

Fry’s use of capitals there is not, I think, standard in Hiberno-English. However important the third person, the “h” would usually be lower case, as in an example quoted by Fowler – from that ultimate source of authority on Irish life, Roddy Doyle’s The Van – “I’ll mention it to himself”.

But then again, Fry was also recalling his “most notorious experience with Himself”, when Byrne asked him what he would say to God, if it turns out one exists, resulting in a skirmish with the blasphemy laws. Maybe, not believing in the other He, Fry was just reallocating the capital Hs.

The contrastingly devout GK Chesterton, a convert to Catholicism, liked to recall a story he once heard in Ireland about someone who, on a remote western road, had met “a beautiful peasant woman carrying a child”.

Asked her name, the woman didn’t give one.  She declared instead, in fluent Hiberno-English: “I am the Mother of God, and this is Himself, and He is the boy you will all be wanting at the last.”

The story made such an impression on Chesterton that many years later, searching the religious art shops of London for an image of the Virgin Mary as a present to his local church, he couldn’t find one he liked, no matter how expensive.

Finally, in an upstairs storeroom of a shop, he saw a picture newly unpacked but as yet unconsidered by the salesman, that matched the image in his head. “She was a peasant and she was a queen”, he wrote. And sure enough, the barefoot Madonna turned out to have been made in Ireland. As Chesterton should have exclaimed but didn’t: “It’s Herself!”.

(On which note, by the way, “It’s Herself” was also the title of a 1971 album by the Castleblayney-born country and western singer, Anna McGoldrick – thereby proving that this is an equal-opportunity form of pronoun use. Oxford Dictionaries please copy.)

With the scattering of audiences in so many different directions, the most Ryan Tubridy can probably hope for now is to be called “your man”

Getting back to matters more profane, there was a time in Ireland, within living memory, when the title “himself” (with or without a capital) was also widely conferred on a horse. That was the peerless Arkle, of course.

This being so, it was blasphemy of another kind, arguably, when “It’s Himself” became the name of a 1990s racehorse of somewhat lesser greatness. The animal’s record – two wins from 18 starts – suggested strongly that, in another Hiberno-English phrase, he was “not himself”. But then that expression usually implies ill health, or sometimes just a bad mood.

In referring to “a third person of some importance”, it should be said, “himself” or “herself” need not always indicate respect. Hence, for example, a scene in Joyce’s Ulysses:

“So we turned into Barney Kiernan’s and there, sure enough, was the citizen up in the corner having a great confab with himself and that bloody mangy mongrel, Garryowen, and he waiting for what the sky would drop in the way of drink.”

But in Gay Byrne’s case, I’m sure, it was usually affectionate. Either way, he was probably the last Irish broadcaster who could be routinely referred to by the term. With the scattering of audiences in so many different directions, the most Ryan Tubridy can probably hope for now is to be called “your man”.

Regardless of who he was talking to in studio, Gay’s confabs included most of the country. I can’t recall if his many interviewees ever included the playwright Arthur Miller. But Miller’s famous definition of a good newspaper could have been amended slightly to apply to Byrne’s Late Late. At its best, as Stephen Fry found out, it was a nation talking to himself.

1 Nphet signals strong opposition to parts of Government plan to exit lockdown
2 Admission of mistake in Oxford vaccine dose raises doubts over reliability
3 Black Friday hotel deals: some of the best offers from around Ireland
4 Helen McEntee defends role in appointment of Séamus Woulfe amid Dáil questions
5 Cliff Taylor: Deal or no deal we are now heading for a hard Brexit
Real news has value SUBSCRIBE