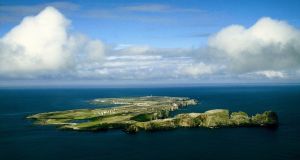 Tory Island. A notorious shipwreck happened there 125 years ago this autumn. It involved a gunboat, the HMS Wasp

There are no rats on Tory Island, apparently, a mystery explained by the effect of sacred clay. According to the tradition, the clay was taken from a special grave many years ago. Distributed in small amounts around the island, accompanied by a prayer, it is said to do for rodents what St Patrick did for reptiles.

Mere distance from the mainland would hardly account for the pests’ absence.  After all, in a diplomatic incident still waiting to happen, the Irish language uses the same word for “rat” as “French person”: francach being a contraction of luch francach, “French mouse”, as the first rats seen in Ireland were called that after disembarking from a rather longer sea journey.

Nor would lack of another phenomenon associated with rat migration – sinking ships – explain Tory’s rodent free status. The island has had more that its share of wrecks down the centuries, some near enough the shore that a few four-legged refugees might have made it to land.

One of the most notorious such disasters happened 125 years ago this autumn. It involved a gunboat with another pestilential name, the HMS Wasp: one of a long series of Royal Navy vessels so titled.

That this Wasp was presumed to have been on a mission to sting the natives of Tory gave rise to suggestions of another local superstition being implicated in its demise.

The ship hit the reef a second time and sank in minutes, taking 52 men with it

The Wasp had a mixed reputation in Donegal. During one of the perennial periods of distress there, it had carried seed potatoes (donated by the Quakers) to the troubled districts.

But on September 22nd, 1884, it was sailing through the night to Moville, to pick up police officers and bailiffs en route to Inishtrahull Island, where instead of potatoes it was to distribute eviction orders.

It never got there. At around 4am, when most of the crew were asleep, it collided with rocks just off Tory, causing catastrophic damage. Roused from his bunk, the captain ordered lifeboats lowered but it was already too late. The ship hit the reef a second time and sank in minutes, taking 52 men with it. Six crew members clung to a mast long enough to be rescued. Those were the only survivors.

Local conditions were said to have been no worse than squally.

But by the time a correspondent from the Belfast Morning News reached Dunfanaghy, Tory was cut off by a full-blown storm. He assured readers that “death would be certain to overtake the occupants of any boat which might venture to put out”.

So he had to piece events together from such accounts as had reached the mainland, including the details that a “Gunner Kerrigan” from Cork was among the dead, having been “perhaps the only Irishman on board”. He also reported that the six survivors were safe on Tory, where the islanders were treating them well.

This last bit may be interesting in light of a tradition that emerged in the wake of the incident. It was summarised many years later by the Dublin poet Austin Clarke who in his 1968 memoir, A Penny in the Clouds, recalled a visit he had made to Tory. One day there, as he wrote: “I set out for the Cursing Stone. This is a great boulder balanced on the edge of a precipice about 700 feet above the sea, half in half out. In the old days, Lord Leitrim sent out a gunboat, The Wasp, to collect rents that had never been paid, but an old woman went up to the stone and turned it leftways against the sun.

Like a bomb without a detonator, the larger part of a cursing stone is useless without the smaller ones on top

“The warship sank in the calm waters in sight of the anxious islanders. […]The tide brought the drowned crew back to Ireland and their wide grave may be seen in the little Protestant churchyard at Killult [near Gortahork on mainland Donegal]. Later I stayed for a month within a stone’s throw of the tomb […].”

The official court-martial of the Wasp’s survivors did not blame the sinking on any curse, nor indeed on the crew, although it did hear that the navigating lieutenant had insufficient experience of the waters and that there had been a general “want of due care”.

But speaking of stones’ throws, it is said that a priest on Tory, Fr O’Donnell, was sufficiently annoyed by suggestions of supernatural involvement as to make sure it wouldn’t happen again.

Like a bomb without a detonator, the larger part of a cursing stone is useless without the smaller ones on top.

Fr O’Donnell is said to have defused the boulder accordingly.

What he did with the stones is unknown, but it seems likely they ended up where the ship did: at the bottom of the sea.

4 Holohan warns of up to 1,000 Covid-19 deaths in January, calls for tighter air travel rules