The Irish Times view on the Northern elections: a retreat into tribal camps 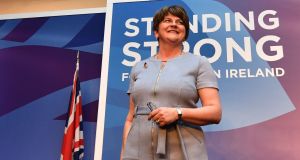 The chances of the DUP, under Arlene Foster, in North Belfast have been given a boost by the decision of Ulster Unionist Party leader Steve Aiken not to run a candidate in the constituency. Photograph: Colm Lenaghan/Pacemaker

The move by four of the big parties in Northern Ireland not to contest some Westminster election constituencies for tactical reasons represents a disappointing retreat to tribal politics but, on the positive side, it has raised the prospect of significant change on both sides of the sectarian divide. The outcome will depend on how many voters feel that the stance of their politicians on Brexit is more important to them than simple tribal allegiance.

In the outgoing British parliament, the Democratic Unionist Party (DUP) held 10 seats in the House of Commons and Sinn Féin seven, with the final one being occupied by Independent Unionist Sylvia Hermon. She was the only MP from Northern Ireland to represent the views of the majority of people in the region, which voted to remain in the EU. Sadly, she has announced that she is not running again – the absence of her independent, moderate and sensible voice will be a significant loss to politics in the North.

The decision of Ulster Unionist Party (UUP) leader Steve Aiken to bow to political pressure (and threats of violence) and not run a candidate in North Belfast is regrettable but understandable. Aiken’s move makes it more likely, but by no means certain, that DUP deputy leader Nigel Dodds will hold on against a determined effort by Sinn Féin to win the seat for its candidate John Finucane, the current Mayor of Belfast.

The DUP put pressure on Aiken to change his stance by announcing that it would stand aside to allow the UUP a clear run in Fermanagh South Tyrone, giving the party a real chance of winning back the seat held by Michelle Gildernew of Sinn Féin. There are a number of other constituencies where the SDLP and the UUP have a chance of making a comeback to the House of Commons. One of them is in Foyle, where SDLP leader Colum Eastwood is in with a good chance of recovering the seat held for so long by John Hume. But he will probably need some unionist votes to unseat Sinn Féin.

Alliance Party leader Naomi Long has a tough battle on her hands to regain her seat in East Belfast but the performance of her party across the North will tell whether it can build on the progress made in the local and European elections to become a real force in Northern politics.

If the SDLP, the UUP or Alliance can win seats it will mean that the voice of a majority of people in Northern Ireland will be heard in the new British parliament and that would be a really positive development. It would also be a sign that there is some hope for normal politics in the North, starting with the resumption of the devolved institutions at Stormont.

The unfairness of the straight vote system, combined with tribal politics, will make it difficult for all of the parties apart from the DUP and Sinn Féin, but at least a real contest is in store.