A bird to look up to – Frank McNally on a lesser-spotted but gifted member of the crow family, the jay 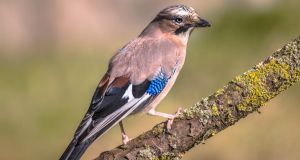 For jays, the crucial thing is acorn-harvesting, so they gather wherever oak trees do. Photograph: iStock

One of the downsides of running in the Phoenix Park, as I do more often than walking in it, is that you spend a lot of your time looking at the ground. At least in the wooded parts, for purposes of self-preservation. Tree roots are treacherous to tired legs. You need to know exactly where they are at all times.

This may be one of the reasons why, as I realised when reading a new book called Ireland Through Birds, I have almost certainly never seen a jay, that lesser-known member of the crow family.

But as I have also just learned, thanks to the book’s author Conor W O’Brien, the Phoenix Park would be one of the best places to look for one, if you were not otherwise occupied.

My prior ignorance about jays extended to assuming that, like their corvid cousins the ravens, rooks, and jackdaws, they were black.

On the contrary, I now know. As O’Brien writes, they’re among the most colourful birds we have in Ireland: with an overcoat of pinkish tan, black and white trimmings, and a “brilliant electric blue scaling” on the wings.

But if you think such extravagant regalia would make them impossible to miss, you’d be wrong.

They’re also shyer than their monochrome relations and less numerous.

That’s why they feature in the book.

O’Brien had the charming idea of tracking down 12 of Ireland’s rarer species to their favourite habitats and, so doing, to write about the places as well as the birds.

To see a cuckoo, for example, he went to Connemara.  For a corncrake (a species also retreating to Gaeltacht areas), it was Tory Island.

As a rule, his birds avoid the madding crowd, but jays buck the trend. For them, the crucial thing is acorn-harvesting, so they gather wherever oak trees do. In this respect, the great city park in Dublin is a sanctuary.

Getting back to runners, it so happened that the September day O’Brien went jay-watching, in a year unspecified, was the same one on which a madding crowd had converged at the Phoenix Monument for the annual half-marathon. I may well have been among them.  In the meantime, O’Brien’s quest took him to one of the park’s several oak plantations, nearby.

Crows in general are clever birds. Jays in particular are geniuses.

They’re sometimes likened to “feathered apes” for their human-like reasoning powers, and the darkness of their woodland habitats aside, their lack of visibility is partly the result of the covert work they engage in at this time of year.

Not only do they have to collect enough acorns to see them through the winter, they also have to hide most of them, where rivals won’t think to look.

Their vocal talents are prodigious too.

The jay’s ability to mimic the calls of other birds, a trick designed to intimidate or confuse its enemies, can also fool experienced birdwatchers.

As O’Brien marvels: “Some jays will even copy human speech or weave the motifs of suburban soundscapes (lawn mowers, crying babies, dripping taps) into their songs.”

Where their cunning may have betrayed them, in this country anyway, was in the evolutionary choice of acorn-gathering as a specialty.

After centuries of deforestation and with our latter-day conifer plantations all but useless, this no longer provides the living it once did. “The jay is not in trouble in Ireland – yet,” the book warns. “But if it had a heyday here, it’s certainly over now.”

Scarcity is another reason I may never consciously have seen one.

But I needn’t feel too ashamed, it seems.

Even armed with binoculars, knowing exactly what he was looking for, and being surrounded by oak trees “in all their glory”, the author also struggled to make a sighting.

The various calls he heard were an unreliable guide, for reasons aforementioned, and the jay’s vibrant colours were lost in the shade.

Then, suddenly, they emerged from the shadows, flying between branches are performing “arboreal acrobatics”, such as hanging upside down to prise an acorn out of its socket.

One even obligingly alighted on a fence post, to pose “in its full majesty” for the author’s camera.

But before the light filter can adjust to capture it, the target has flown again.

A little later, the author hears the jay’s “alarm call” somewhere: the true voice behind the mimic, a raucous, unmusical sound “as close to a growl as I’ve yet heard from a bird”.

This is O’Brien’s own signal to leave the small wooded area and return to the park of tarmac and grass. There, another flock is about to scatter. With a round of applause, he writes, “the half marathon begins”.