The Catholic Church hasn’t gone away you know 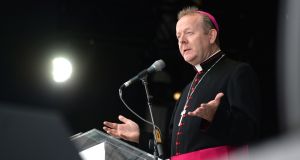 The fundamental democratic principle of separation between church and state was articulated eloquently by then presidential candidate John F Kennedy in a famous pre-election speech at Houston, Texas, in September 1960. Kennedy spoke of his belief in an America “where no Catholic prelate would tell the president (should he be Catholic) how to act” and in a president “whose fulfilment of his presidential oath is not limited or conditioned by any religious oath, ritual or obligation”. This is a clearly secularist vision. It is a healthy approach to state governance which ensures that legislators make laws without reference to the doctrines of any religion. It also enables freedom of religious expression by individual citizens, because no one religion may dominate, or wield power over, state institutions.

At last week’s Kennedy summer school in New Ross, a very different vision for the role of faith in politics was articulated by Archbishop Eamon Martin, the leader of the Catholic Church in Ireland. He spoke of “Catholic politicians” having responsibility “to support laws which uphold the dignity of every human person made in God’s image ... from conception to death” and cautioned against politicians having “parallel lives” compartmentalised into “spiritual and secular spheres”.

This perspective is deeply problematic. Not only does it undermine the core principle of church-state separation, but if adopted it would lead towards a very different model of governance; not that of a republic, but of a theocratic state where legislators must look to religious leaders before deciding how to vote or what policies to adopt. In a country where 78 per cent still identify as Catholic, one religion would inevitably dominate; those of minority religions or none would become second-class citizens.

Archbishop Martin’s view that religious teaching must influence public policy represents a perspective which has overshadowed Irish society for far too long. In the early decades post-independence, the Catholic Church effectively became a “shadow welfare state”, running schools and hospitals, along with industrial and reform schools where, as we now know, appalling abuses were carried out on children. Along with the accounts of brave survivors, the disclosures in a series of reports have helped to undermine church power in recent decades. But the legacy remains strong, particularly in education.

Even today, 90 per cent of our 3,200 primary national schools are Catholic-controlled. The State pays the salaries of teachers and the upkeep of school buildings, but the church still owns the buildings, making any change difficult. This is compounded by a “developer’s wife” syndrome, where many religious orders have transferred their extensive property assets to lay-run trusts, which unlike the religious orders, have no liability to the State for unpaid redress. Thus an entrenched system of religiously segregated education is retained, against the wishes of many parents.

Church power remains evident in other spheres too. Due largely to the strong influence of Catholic teaching, Ireland legalised divorce and contraception much later than other EU states. Until last year’s historic referendum, we had the most restrictive abortion laws in Europe. Despite the guarantee of religious freedom in Article 44 of the Constitution, religious influence remains strong throughout the text, with our President and judges required to take religious oaths upon assuming office. Even the constitutional preamble begins, “In the name of the most holy Trinity”. We may have deleted reference to the offence of blasphemy, but further constitutional change is needed to ensure the text reflects contemporary pluralist society. As then Taoiseach Enda Kenny said in July 2011, church doctrine is no longer treated with the deference that used to prevail. Legislators and voters alike no longer fear a belt of the crozier, as we have seen in recent successive referendum votes; marriage equality in 2015 and abortion just last year. In 2018, the people voted by a decisive 66.4 per cent to repeal the Eighth Amendment, in the face of a strident anti-choice campaign in which Catholic legislators were threatened with excommunication if they voted for repeal.

But we cannot assume that secularist progress is inevitable. Each referendum or legislative change was hard-fought, and strongly resisted by church-related organisations and individuals. Indeed a particularly fervent set of lobbyists has emerged to campaign against a more secular society; they polemicise through the media and from the pulpit in a “soapbox and crucifix” strategy. They haven’t gone away you know.

A more positive vision of church-state relations has emerged recently, however, with a plenary meeting convened by the Taoiseach in July bringing together representatives from 28 different religious and ethical groupings, including the Humanists. Described as representing a new covenant for the 21st century, it is actually based upon the secularist principles expressed by JFK nearly 60 years ago. A secular society is not a society that is anti-religion but a society where all citizens are free to hold different ethical or religious beliefs, in which the state does not favour any one religion or belief-system. The simple Swedish phrase sums it up: “In school, you teach; in church, you preach.” The two should not be confused. In Ireland, for too long the church has preached at us in the political sphere. It’s time for change.