‘Humans Need Not Apply’: To some this evokes a nightmare vision of the future, with mass job losses 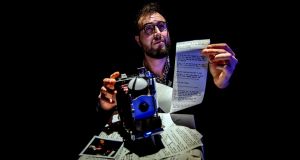 Ross Goodwin, creative technologist, artist, hacker and data scientist, with his installation ‘word.camera’ that translates photographs into poems. He is involved in the Humans Need Not Apply exhibition at the Science Gallery, which runs until May 14th. Photograph: Brenda Fitzsimons

In response to the imminent threat of job automation we have looked to political leaders promising to stem the economic tide or to tech leaders who are positively chirpy about the prospect of at last liberating their enterprises from as many bothersome human beings as possible. Instead we should look to the exquisite idleness of Oscar Wilde and rediscover the dream of a future of leisure, beauty and self-cultivation for all.

Among the many explanations for the recent rightward turn in politics in the western world, one of the least explored – perhaps because it’s simply too epochal in its implications for most of us to contemplate – is the spectre of the automation of human labour. According to economist Jed Kolko, the most precise predictor of who and where Donald Trump votes came from in the recent US elections was not low-wage jobs but specifically the concentration of “routine” jobs, in other words those most susceptible to offshoring and automation. Trump was the candidate that most strongly emphasised job protection and a return to prioritising industry and infrastructural development, a last hope for delaying the impact of the market forces of off-shoring and the inevitable rise of robotics and artificial intelligence that are about to change everything.

The issue is currently being explored in the Science Gallery, Dublin, in an exhibition provocatively titled Humans Need Not Apply. To some this evokes a nightmare vision of the future, with mass job losses, purposelessness and large sections of society suddenly rendered surplus to requirements, like a recession, but permanent. If these economic developments are not managed for the benefit of the many, people may be right to panic. A society with less work will by definition lessen the bargaining power of organised labour and lessen the necessity for the provision of things such as mass educating.

An Oxford University study of the US economy concluded that about half of jobs are currently vulnerable to automation. But those who think a country such as Ireland might be safe due to the much evangelised “knowledge economy” will be disappointed to learn that white-collar and tech jobs are becoming just as easy to automate as manufacturing ones.

A report in November suggested that half of Irish tech jobs are expected to be automated within the next 10 years. Driverless cars and an increasingly automated service sector have already arrived. In China even bridge building is now being done by machines.

Published in 1891, Oscar Wilde’s The Soul of Man under Socialism gave us a very different vision of the future to the workerism we associate with the Soviet Union or the Protestant work ethic that dominated in most of the West, which holds up toil as a moral virtue. Instead, Wilde utterly rejected this “hideous cant about self-sacrifice” and praised in its place “the exquisite art of idleness”. He envisioned a world in which the ambition of everyone could be to live as an aristocrat. This coming age of automation may be the first time in history such a vision is about to become possible.

For several generations we have been making all kinds of commercial activity more efficient with too little benefit for the majority of people’s lives. In our cities, highly educated professional couples struggle to pay their life long mortgages for modest homes that were within the reach of a one-income tradesman’s family just a generation ago. The Anglo-American culture of working until you drop has been repackaged as self-actualisation and fulfilment. We are taught from an early age that our work defines us. In the case of white-collar female workers, this is even supposed to constitute female liberation, when in reality most work is anything but liberating. Our houses are filled with machines to automate domestic labour yet we have somehow ended up creating just as much work as we did before them.

We need to ask, in an age of previously unthinkable efficiency, computerisation and profits, how have we ended up working as much if not more than before? We are beginning to see the first experiments and ideas to make the most of these changes. Universal Basic Income, for example, would provide everyone with a guaranteed dividend, which people could live on comfortably; while incentivising job-sharing would help maintain well-paid, part-time work.

And yet, many feel a certain resistance to these ideas. We still feel that the devil makes work for idle hands. Maybe some think that while they might be able to spend their free time doing fulfilling and interesting things, other people won’t. They imagine a slovenly society of bureaucratic ugliness – one vast grey ubiquitous dole queue.

What we really need then is not just a change in the way we distribute wealth, but a cultural revolution to change our priorities and values.

More leisure time means being able to spend time with your children, family and loved ones, to spend more time laughing and talking with friends and neighbours, to learn for the sake of learning, to enjoy art for art’s sake, to be involved in your community if you choose, to go on more holidays and spend time appreciating nature, to have the time to pursue a meaningful life and to be the master of your own destiny.

In Wilde’s time such a life of leisure was only available to the aristocracy. In the mid 20th century leisure was expanded to parts of the middle-class. In the 21st century our goal should be to extend the possibility of a good life to the whole of society instead of trying to cling on to work with little rewards.

“The fact is that civilisation requires slaves,” said Wilde, but “human slavery is wrong, insecure, and demoralising. On mechanical slavery, on the slavery of the machine, the future of the world depends.”

Angela Nagle is a cultural critic for The Baffler, Current Affairs and Dublin Review of Books