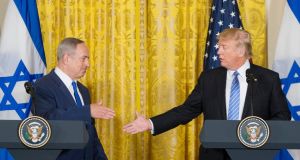 Israeli prime minister Binyamin Netanyahu with US president Donald Trump whose statement that he favoured neither the two-state solution nor the one-state solution has unsettled Palestinians, Israelis, and the international community. Photograph: Michael Reynolds/EPA

Washington’s UN ambassador Nikki Haley has contradicted US president Donald Trump by saying that America’s policy on the Arab-Israeli conflict remains the two-state solution – a Palestinian state alongside Israel. But, she added, “We are thinking out of the box as well.”

Trump’s statement that he favoured neither the two-state solution nor the one-state solution – a binational, federal state – has unsettled Palestinians, Israelis, the region and the international community. His suggestion that the US could move away from the former would negate 50 years of international efforts to deal with Israel’s occupation of East Jerusalem, the West Bank and Gaza.

As soon as these areas were captured in June 1967 from Jordan and Egypt, Israel annexed East Jerusalem and began building settlements, violating the Fourth Geneva Convention which prohibits an occupying power from transferring parts of its own civilian population into the territory it occupied. The UN Security Council has consistently argued Israel’s settlement construction is illegal. This stand was reaffirmed last December in resolution 2334 which terms settlement activity as a “flagrant violation” of international law and says it has “no legal validity”.

The push to end the occupation – and illegal settlement – began in November 1967 with security council resolution 242 which called for an Israeli withdrawal from occupied territory in exchange for an end to Arab belligerency: this became known as the “land for peace” formula. Israel has refused to withdraw and constructed 120 settlements and more than 100 outposts, holding land meant to be traded for peace.

In November 1974, Palestine Liberation Organisation (PLO) chairman Yasser Arafat addressed the UN General Assembly, putting forward the case for Palestinian statehood. He held up an olive branch and a gun and warned that if this was not achieved by peaceful means, Palestinians would resort to armed resistance. The assembly endorsed Arafat’s aspiration of self-determination in a Palestinian state.

In November 1988, the exiled Palestinian parliament met in Algiers and issued a declaration of independence. On December 7th, during a visit to Stockholm, Arafat clarified the PLO’s stand by stating, “We accept two states, the Palestinian state and the Jewish state of Israel.” Land for peace had become the two-state solution.

On September 13th, 1993, the Oslo Accord, secretly negotiated in Norway by Palestinians and Israelis, was signed with great fanfare on the White House lawn in the expectation Israel would withdraw from the occupied territories and a Palestinian state would emerge. To give momentum to Palestinian-Israeli negotiations stalled over Israeli settlement activity, the 2002 Arab summit revived the land for peace deal by proposing full normalisation with Israel in exchange for full withdrawal from occupied Arab territories. Israel has rejected the deal with bricks and mortar. The number of settlers in East Jerusalem and the West Bank rose from 257,700 in 1993 to more than 765,000 today.

Although settlements have pre-empted and prevented the establishment of a Palestinian state, the Palestinian Authority, Israeli government and western powers have continued to use the two-state vision as a means to dissuade Palestinians from revolting and to placate opponents of the occupation in Israel, the region and the international community.

Abandonment of the two-state solution could have serious repercussions in the Palestinian territories. President Mahmoud Abbas, who has relied solely on a negotiated deal, and Fatah, could come under enormous pressure to dissolve the West Bank-based Palestinian Authority. The administration has been accused of colluding with Israel by suppressing Palestinian resistance to the occupation and of crushing domestic dissent. Unless Fatah returns to the armed struggle, Hamas, which rules Gaza, could adopt this option as it faces competition from Islamic jihad and other radical factions. Individual Palestinian attacks on Israelis in the West Bank and East Jerusalem could escalate, compelling Fatah and Hamas to take up arms.

While the virtual Palestinian state has been recognised by 136 of the 193 UN members and is regarded as a “non-member observer state” by the UN, Palestinians remain stateless. Since the land between the Mediterranean and the Jordan river now has 6.4 million Palestinian and 6.1 million Israeli Jewish inhabitants, Israel, which intends to remain a democratic Jewish state, cannot grant Palestinians citizenship. Thus, occupation is set to continue with Palestinians having limited self-rule in the cities and towns of the West Bank while Jewish settlements will continue to grow in the 60 per cent of this area which is under full Israeli rule as well as East Jerusalem. Palestinians and Israeli peace activists call this system “apartheid”.

While Israeli soldiers and settlers withdrew from Gaza in 2005, Israel has maintained detached control over the isolated strip from Gaza’s borders. Israel will continue to do so and will exert pressure on Palestinians to emigrate but, unwilling to become refugees in a hostile world, Palestinians will stay put.

Arab League chief Ahmed Abul Gheit responded to Trump’s comments by saying the Arab-Israel conflict “requires a comprehensive peace based on a two-state solution with an independent Palestinian state . . . on 1967 borders with its capital in Jerusalem.”

The league is well aware abandonment could put weak pro-Western Arab regimes at risk. The loss of Palestine in 1948 triggered three military coups in Syria in 1949 and the overthrow of pro-British kings in Egypt in 1952, Iraq in 1958, and Libya in 1969. Al-Qaeda and its derivatives, under pressure in Syria and Iraq, may well be reinvigorated and could increase efforts to carry out operations in the region and elsewhere in the name of Palestine.