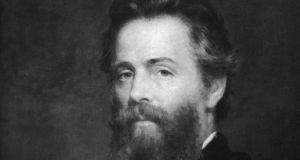 The bicentenary of Herman Melville’s birth on August 1st reminds me, among other things, of why I stopped reading library books.

This is because about 25 years ago, or maybe 30, I borrowed Melville’s masterpiece Moby Dick from a Dublin library and read it all the way through, something that apparently sets me apart from the vast majority of even book-loving humanity.

But apart now from a vague memory of the plot, and an even vaguer memory of being enthralled, I have very little to show for the investment of time.

My only specific recollection is of laughing out loud at the bit on page one where the narrator describes the urge that every so often impels him to sea, when the frustrations of life on land have him at the point of “stepping into the street and methodically knocking people’s hats off”.

Whereas had it been my own copy, as has long become habit, I would have written notes in the margins everywhere, or at least marked with an “x”, “nb”, or even “!!??!” parts of the text that struck me as particularly interesting.

That way, I could re-read these now in minutes and thereby re-live the highlights of total immersion.

Who knows – there might even be an original thought somewhere among them. Moby Dick has been known to provoke such things.

One of my column-writing heroes, Dave Barry (formerly of the Miami Herald), purporting to give advice to students of English literature once, cited Melville’s epic as an example of how to get good grades.

“So in your paper, you say Moby Dick is actually the Republic of Ireland. Your professor, who is sick to death of reading papers and never liked Moby Dick anyway, will think you are enormously creative.”

I’m fairly sure that Moby Dick as a metaphor for Ireland is not one of the insights I’d have written in the margins of my copy, circa 1990.

But funnily enough, when John Huston was making the 1954 film version, he did have Ireland deputise for the original Massachusetts.

He needed a town that could be easily recreated as 1840s New Bedford, and 1950s New Bedford had too much modernisation to qualify. So from a short-list that also included Wicklow, Arklow, and Kinsale, he chose Youghal.

Not only that, but while casting various Irish people as grizzled, 19th-century sea veterans, he included an Irish Times columnist Seamus Kelly, who even then, in his early years as the Irishman’s Diarist, had been reduced to looking like Flask, third mate on the Pequod.

Did Kelly read Moby Dick? Not if his fellow columnist Myles na gCopaleen is believed.

Around the time the film was made, Myles admitted his own unfamiliarity with the text while, on the subject of Melville, marvelling: “We are confronted with the terrifying image of a man who has made his name forever immortal [I hesitate to accuse Myles of tautology but if Melville’s immortality has lasted less than “forever”, he should demand a refund] by having written a book which nobody – absolutely nobody – has ever read.”

This is less an exaggeration that it might be for most great works. When first published, Moby Dick received poor reviews and, in the words of Patrick Kavanagh, “fell dead from the press”. It took Melville’s 1919 centenary to provoke a revival of interest.

This may be why Kavanagh had a copy of the book by 1930, and why it became one of his favourites. In contrast with Myles, he claimed to have read Moby Dick “scores” of times.

Kavanagh also said of it something I have elsewhere heard only of Finnegans Wake – that you can start reading it on any page: “Because [Moby Dick] has some eternal quality, you can open it anywhere, the beginning is anywhere.”

Speaking of FW, I am myself now engaged in the slow process of reading that. I started at the start, for the hell of it, and have so far reached page 150, but with an embarrassing lack of margin notes, because I can’t think of anything to say.

As for Moby Dick, I may soon have to reopen it, somewhere, this time with pencil in hand, and stretch my lead over Myles na gCopaleen by joining the select group to have read it twice.

1 Cork shootings: Gardaí find lengthy apparent suicide note on one of the dead men
2 Former solicitors ran an ‘identity factory’ in committing fraud – court told
3 Róisín Ingle: Five small ways to find joy in a pandemic. Only one of them is illegal
4 Ciara Kelly: I was pregnant, unmarried, a junior doctor and I got old-school comments
5 Michael McDowell: We must check if this Covid-19 lockdown is really necessary
Real news has value SUBSCRIBE