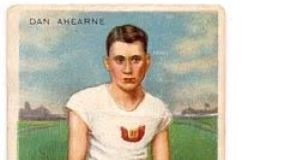 Among the famous birthdays of April 12th – although famous might be overstating it now – is that of Dan Ahearne, an Irish and American athlete born in Limerick 130 years ago today. Ahearne’s speciality was long-jumping, in instalments.

His finest hour was in New York in 1910, when he improved the world record for what was variously called the “two hops and jump”, the “hop, skip, and jump”, or the “triple jump”, with a combined leap of over 50 feet.

So doing, he succeeded a fellow Limerick man, Dan Shanahan, as record holder.

But not the least remarkable thing about him is that he may not have been the best triple jumper in his own family.   An older brother, Tim Ahearne, won gold in the event at the 1908 Olympics, representing Great Britain.

The Ahearnes were part of a remarkable generation of sportsmen from the earlier part of last century, whose exploits became a source of pride to Irish nationalists, although of necessity, they usually took place then in the colours of other nations.

They may also have been the inspiration for one of the funnier passages in Irish literature, from Flann O’Brien’s comic masterpiece At Swim-Two-Birds. Amid the general chaos of that novel-within-a-novel is an extended reflection on long-jumping as a theatre of national excellence.

“That was always one thing, said Shanahan wisely, that the Irish race was always noted for, one place where the world had to give us best. With all his faults and by God he has plenty, the Irishman can jump. By God he can jump. That’s one thing the Irish race is honoured for no matter where it goes or where you find it – jumping. The world looks up to us there.”

Shanahan’s monologue is accompanied by a story “from the early days of the Gaelic League”, wherein an RIC man, one Sergeant Craddock, is monitoring a rural sports event. There he is accused in Irish – a language he can’t speak – of being an English spy.

So to vindicate his honour, he accepts a challenge to perform the next best proof of Irishness – a jumping competition. The event organisers have a secret weapon in Bagenal, an All-Ireland champion, who nonchalantly leaps 22 feet – “enough to make the sergeant puke what was inside him and plenty more that he never swallowed”.

But then Craddock astonishes the assembly with a riposte of “twenty-four feet six”. In the process, he not only rescues his own reputation, he adds to Ireland’s. “Go to Russia, said Shanahan, go to China, go to France. Everywhere and all the time it is hats off and gra-ma-cree to the Jumping Irishman.”

Of course the immediate trigger for O’Brien’s flight of fantasy is another of the book’s characters, Sweeny, the mad king, who has been turned into a bird and condemned to spend life hopping from tree to tree. And the novel’s cast also includes Finn MacCool who, as the greatest of the Fianna, had prodigious jumping talents as standard among his repertoire.

The Fianna’s entry criteria were notoriously stringent. Candidates had to be able to extract a thorn from their feet while running at top speed, learn 12 books of poetry, and defend themselves against spear attack from nine warriors while buried up to their waists, none of which became modern athletic disciplines.

But they also had to jump – on the vertical rather than horizontal plane. And the standard there was modest enough by Olympic standards, requiring them only to leap over a branch the height of their foreheads.

Curiously, Irish athletics of the pre-independence era was much less well known for the height rather than length of jumping.

An exception was the extraordinary Martin Sheridan, Olympic medallist in both high and long jump, as well as a plethora of throwing events.

More typical was Peter O’Connor, who in 1906 in Athens won gold in the triple jump and silver in the long. He is also remembered for a vertical spectacular there: shinning up the flag-pole with a green standard, bearing the slogan “Erin go Bragh”.

But his greatest leap had been another long one in 1901, when he surpassed both the fictional Sergeant Craddock and the actual world record holder Myer Prinstein to jump almost 25 feet.

That was unsurpassed anywhere until the 1920s.

Thereafter it became a metaphor for the economic struggles of post-independence Ireland. Flann O’Brien’s comic mythology notwithstanding, O’Connor retained the national long jump record for an astonishing 89 years, until Carlos O’Connell made an even greater leap forward, by two centimetres, in 1990.