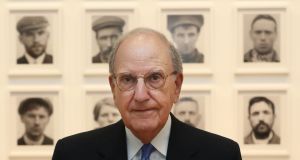 On the night before the Good Friday Agreement, in one of the many last-minute crises of a heady week, I realised that, when leaving my Belfast hotel for the talks venue earlier in the day, I had forgotten to bring a jumper.

The extent of this mistake became apparent as darkness fell on the media marquee at Stormont. Air temperatures were plummeting in inverse proportion to the temperature of the negotiations. In Eskimo parlance, it was going to be a three-dog night.

It was also a three-edition night, unusually. So after filing copy for the first, by now shivering, I decided to risk the time it would take for a return trip to the hotel, exiting Stormont by the usual side-gate and then driving back along the Newtownards Road past the main entrance.

They were causing a tailback by draping car windscreens with union flags. Running which gauntlet, in slow motion, I became painfully conscious of my southern-reg car

There, outside the gates – literally and metaphorically – was a gathering of that fearsome Biblical tribe, the Paisleyites. And not just the Paisleyites, but also, according to banners and badges, some of the lesser anti-agreement tribes, including supporters of the Loyalist Volunteer Force.

They were causing a tailback by draping car windscreens with union flags. Running which gauntlet, in slow motion, I became painfully conscious of my southern-reg car.

This was an era when, as someone on Twitter reminded me this week, fans of Belfast’s traditionally nationalist soccer club Cliftonville were amending a taunt for unionist rivals – “You’re going to get your fucking heads kicked in!” to the more progressive “Cross-border bodies with executive powers!”, which scanned nearly as well.

But not everyone in the city was as forward-looking as that then, and I was paranoid.

Happily, neither my head nor the car was kicked in. Even more happily, when I made the return journey, dreading the addition of Easter Thursday night drinkers to the protest, the crowd had disappeared.

It turned out they were all inside now, having somehow negotiated a way past the gatekeepers. Back in the media centre, the Rev Ian Paisley was holding a protest press conference, which was memorable for – among other things – him being heckled by his former supporters from the fringe loyalist parties, who were about to sign the deal.

The description of the 20-year-old Belfast Agreement as a “shibboleth” this week, by a British Labour MP, set me searching for the original of that term. As Dr Paisley would have known, it’s from the Old Testament’s Book of Judges, and arose from another gateway incident, with a grislier end.

On that occasion, it was the Ephraimites who were trying to cross the river Jordan, during a time of general smiting. Blocking their path were the Gileadites, who set a linguistic trap for any follower of Ephraim pretending to be something else.

Thus Judges 12: 6: “They said unto him, Say now Shibboleth: and he said Sibboleth: for he could not frame to pronounce it right. Then they took him, and slew him at the passages of Jordan: and there fell at that time of the Ephraimites forty and two thousand.”

The modern definition of Shibboleth is “a catchword or principle to which members of a group adhere long after its original significance has ceased” (Brewer’s Dictionary).

The original is more obscure. It meant variously “ear of wheat”, “stream”, or “flood”, according to Brewer’s. Not that the meaning mattered: the key was how you said it.

Troubles-era Northern Ireland had many shibboleths, if not usually deployed with such brutal intent.

Interestingly, at a time when the Irish language has become so contentious, the particular linguistic issue that separated the original Ephaimites and Gileadites is present in Northern Ireland too

The most obvious was the name of a certain city. Thirty-odd years ago, I heard it as far away as a youth hostel in Thailand, when being greeted by a woman who, recognising the accent, said she too was “Irish”. Then, after a beat, she added the caveat: “I’m from Londonderry”.

The significance of this was lost on the rest our multinational audience of backpackers, although the more sensitive of them may have noticed the slight chill that simultaneously descended.

Most Northern shibboleths were subtler.

The local Ephraimites might aspirate their Hs, for example, where the Gileadites did not, although to outside ears they both said “Hoyever” exactly the same.

Interestingly, at a time when the Irish language has become so contentious, the particular linguistic issue that separated the original Ephaimites and Gileadites is present in Northern Ireland too.

That’s to say there are certain words wherein a slender “S” or a broader “Sh” pronunciation is crucial. The difference here is that both tribes here can pronounce “Sinn Féin” fluently.

Not even the most Irish-disdaining Paisleyite would pretend not to know the phonetic difference between a “sinner” and a “Shinner”.

1 Costa living: ‘Move home to Ireland? I’d hate it’
2 Anti-Irish bigotry in Britain has not gone away
3 Steve Coogan: ‘Come Out, Ye Black and Tans is two fingers to the British’
4 Coronavirus: Almost 60 new cases recorded in Italy as two die
5 Ryanair’s Michael O’Leary under fire for comments on Muslim men
Real news has value SUBSCRIBE