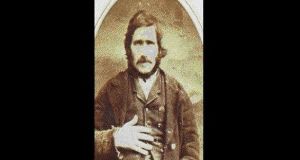 Myles Joyce: a perfect symbol of the fate of Ireland under colonial rule.

The unfortunate Myles Joyce, whose impending pardon for the Maamtrasna Murders will come 136 years too late to save him from the gallows, was not merely the victim of a notorious miscarriage of British justice. He was also a perfect symbol of the fate of Ireland under colonial rule.

This was not lost on his namesake James Joyce, a writer who knew a good metaphor when he saw one. In a famous essay from 1907, 25 years after the Connemara man was wrongfully executed for the murders of a local family (also called Joyce) in an agrarian feud, Joyce the writer portrayed him as the personification of a nation that could not explain itself to the world, but was instead consistently misrepresented by hostile interpreters.

The future author of Ulysses was by then living in Trieste, so his newspaper article “L’Irlanda alla sbarra” (“Ireland at the bar”) was published in Italian. But as he told readers, the 1882 trial had been a collision of two other languages: Irish – the only thing Myles Joyce spoke – and English, through which he was convicted.

The gulf in communication was “at times comic and at times tragic”, Joyce wrote. “On one side was the excessively ceremonious interpreter, on the other the patriarch of a miserable tribe unused to civilised customs, who seemed stupefied by all the judicial ceremony.”

But the latter was entirely dependant on the former, with farcical results. In one typical exchange, when the judge asked a question and the question was translated, wrote Joyce, “the old man broke out into an involved explanation, gesticulating, appealing to the others and to heaven. Then he quietened down, worn out by his effort, and the interpreter turned to the magistrate and said: “He says no, your worship”.

Joyce’s article was provoked by an episode from 1907. That concerned incidents in which cattle had been driven onto Irish roads, in protest against large-scale grazing when many people still lacked all means of subsistence.

In reality, Joyce argued, Ireland had less crime than anywhere else in Europe, including England. Indeed, the other thing that inspired his article were “the Great Wyrley outrages”, then reaching dénouement. That too involved a miscarriage of justice, dating from a series of livestock maimings in Staffordshire in 1903. Blame was pinned on one George Edalji, the solicitor son of a Parsi immigrant. But the case against him, fuelled by old-fashioned racism, was preposterous. He suffered, for example, from a condition called myopic astigmatism, which made his alleged nocturnal crimes difficult if not impossible.

The ghost of poor Myles Joyce may have haunted a Myles of more recent vintage: Na gCopaleen, formerly of this parish. Yes, the latter’s comic masterpiece An Béal Bocht was mainly inspired by the Blasket school of literature. But the plight of its protagonist, a Gaeilgeóir who ends the novel jailed for life on a trumped-up murder charge after a trial he couldn’t follow, surely owes something to Maamtrasna.

So I hesitate to suggest Myles’s creator, Brian O’Nolan, has been the subject of major injustice. But having gone to the trouble of dying on April Fool’s Day 1966, he might be excused for thinking his distinctive anniversary sacrosanct. Whereas I see instead that, for the second year running, the annual Mylesday celebration in Dublin’s Palace Bar has been deferred until April 2nd.

The main reason, again, is rugby. A clash between literature and the Leinster-Saracens game, especially in a pub, might turn ugly. But April 1st is also Easter Sunday this year. And as Mylesday organiser John Clarke laments, it is in general an increasingly crowded date.

The celebration of fools aside, it has also been designated Atheist Day, International Pooper Scooper day, and even something called Edible Book Day. So bake a cake in the shape of a Thomas Hardy novel then, if you wish. Meanwhile, far from the madding crowd, Mylesday at the Palace will be on Monday at 3pm.

1 L’Ecrivain, Derry Clarke’s Michelin-starred Dublin restaurant, to close after 31 years
2 Liverpool’s Klopp responds to Donegal schoolboy who asks him to stop winning
3 Seán Ó Fearghaíl re-elected as Ceann Comhairle of the Dáil
4 John McManus: A black swan moment for Sinn Féin?
5 How much coffee should I drink? How much is too much?
Real news has value SUBSCRIBE