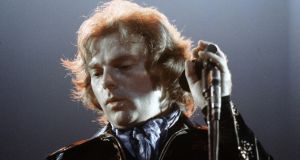 It’ll be 50 years this autumn since Van Morrison recorded Astral Weeks, a masterpiece whose perfection was in contrast to the chaos out of which it was reportedly created. That’s the subject of a fascinating new book, Astral Weeks: A Secret History of 1968, by Ryan H Walsh, a music writer in Boston (where much of the early work on the album happened).

According to one rave review, the book describes such events as how the songwriter had to leave New York months beforehand after “contractual difficulties involving the breaking of an acoustic guitar over Morrison’s head and the peppering of his hotel room door with bullets”.

I haven’t secured my copy of this page-turner yet. In the meantime, curiosity about the guitar incident piqued, I found an article Walsh wrote for Boston Magazine, wherein he interviewed the man who had wielded the instrument, a former New York tough-guy, with mob connections, called Carmine “Wassel” DeNoia.

Circa 1968, DeNoia had somehow acquired Morrison’s contract after the previous owner died suddenly from a heart attack. He must have been a scary adversary. But during their drink-fuelled row, according to DeNoia, the Belfast musician gave as good as he got verbally, until – and this is the bit that jumped out at me – “Wassel put an end to his incomprehensible Gaelic swearing by smashing Morrison’s Martin acoustic guitar over his head”.

I realise this is not the most important detail of the story.

Even so, I would dearly love to know what the “incomprehensible Gaelic” swear words Morrison used were, or even what they sounded like to a New York mobster’s ears.

Perhaps in anger, Van was channelling his Scots Gaelic ancestors. More likely, and disappointingly, he was speaking English in an East Belfast accent. Still, in light of the North’s ongoing language wars, I suppose it’s interesting to hear that this can sound like Gaelic to outsiders.

The important thing in 1968, meanwhile, is that Morrison got on with writing such immortal, non-Gaelic lyrics as “I’m nothin’ but a stranger in this world – I got a home on high”. Also important, for music history, is that he attracted the interest of a record company executive called Joe Smyth, who determined to buy him out of his contractual problem.

The resultant “arrangement”, Smyth told Walsh, involved an abandoned warehouse on Manhattan’s Ninth Ave, where he met four men (“Two tall and thin, and two built like buildings”), and handed over a sack containing $20,000. “There was no small talk. I got the signed contract and got the hell out of there, because I was afraid somebody would whack me in the head and take back the contract”. In the event, Smyth never heard from them again. As he summed up: “They weren’t in the music business.”

Enough about Van, for now. But staying with the theme of incomprehensible Gaelic swear-words, I might remind readers of one we mentioned here a couple of years ago – “Mudebroth” – that was a favourite of no less a person than St Patrick. When I say it’s incomprehensible, that would be true for most people today.

But as explained before, it’s a composite of three Brittonic words, “mo”, “de”, and “broth”, meaning “my,” “God”, and “judgement”. Used in anger by St Patrick, it was a threat of retribution.

That’s divine retribution, of course, not the mob kind: although modern ears, especially New York ones, might mistake “Mudebroth” for a variation of a certain American swear word, sometimes shorted to “Mudda”. Needless to say, they’re no relation.

But speaking of relations, and with apologies for the indelicate segue, the subject of muddas leads me to one of St Patrick’s sisters, Darerca, whose feast-day falls today. St Darerca enjoys nothing like the fame of her brother, who caused much of the world to turn green last week. And yet she was a remarkable figure in her own right. Far from being celibate, she is said to have married twice and to have had many children, including 17 sons. For such heroics alone, she might be considered the patron saint of Irish Mammies.

But even more remarkably, several of her male offspring themselves grew up to be saints (and not just in her eyes).

Also, though she hardly foresaw it, she seems to have been the living embodiment of a joke that, 1,500 years later, Brendan Behan made on his death-bed. Thanking a nun who had cared for him, Behan quipped: “May all your sons be bishops”.

This was no joke in the case of St Darerca. According to one source, bishops is what all 17 of hers became.