Social Democrats and Greens have deliberately ruled themselves out of coalition 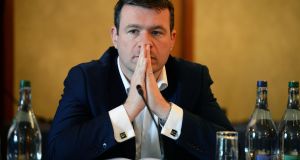 The Labour Party and its new leader Alan Kelly are in a quandary in relation to the formation of a new government. File photograph: Eric Luke

The biggest crisis facing this country in decades has revealed us to ourselves in a way nothing else could. It has to be said that our politicians, our public service and indeed the vast majority of the Irish people have responded to the challenge with dignity and courage and that says something important about the nature of our society.

In every country faced with a crisis of this magnitude the quality of the response starts at the top. Cicero long ago summed up the duty of government in a turbulent world with the simple maxim. “The safety of the people shall be the highest law.” (“Salus populi suprema lex esto.”)

Leo Varadkar’s approach to this crisis has from the start been a model of Cicero’s injunction in action. His sure-footed leadership mobilised public opinion behind the array of restrictive measures necessary to protect the maximum number of people from the worst ravages of coronavirus.

Look at the contrast with our nearest neighbours where the initially flippant and incoherent response of Boris Johnson left the British public without a clear message about what was necessary. The fact that the prime minister then fell victim to the virus has left a power vacuum at the heart of government in the UK at this critical time.

An important element in the relative success of the response here to date has been the broad support given to the Government’s approach by most of the politicians in the Dáil, particularly the main Opposition party Fianna Fáil. The political consensus among the two traditional parties of government has been of inestimable value in shaping the national response.

What has also been crucial has been the magnificent response of the health service and also the wider public service. Inspirational leadership is all very fine but unless it is underpinned by workable structures at every level of the public service it would amount to little more than hot air.

What has been so striking is that the health service here has shown itself to be so competent not simply in treating those struck down by the virus but in planning for the outbreak with such short notice. It compares very favourably with the response of the much-vaunted National Health Service in the UK.

If ever a justification was needed for the establishment of the Health Service Executive rather than the eight regional health boards that preceded it then this crisis is it. Hopefully, the response of staff at all levels in the HSE will transform the public perception of the organisation and lead to a rational debate about how it can be improved in the future instead of the constant denigration to which it has been subject for so long.

The progress or lack of it to date has separated the political parties into two groups: those who are seriously interested in forming a government and those who are not

The wider public service has also demonstrated an ability to react with surprising speed in delivering a whole range of measures from the provision of financial support to the hundreds of thousands of people who have lost their jobs to the supports for business which are necessary to keep the economy ticking over and ready to bounce back when the emergency is over.

There are lessons to be learned here about how a more flexible response can be integrated into the everyday workings of the public service which is too often slowed down by unnecessary bureaucratic rules. Housing springs to mind.

The Covid-19 emergency has of necessity pushed the negotiations for government into the background. Nonetheless, the progress or lack of it to date has separated the political parties into two groups: those who are seriously interested in forming a government and those who are not.

Fianna Fáil and Fine Gael are in the first group, as their agreement on a framework document signifies. Sinn Féin too is interested in government but is incompatible with the other two for a variety of reasons ranging from moral qualms to profound policy differences.

What may come as more of a surprise to voters is the attitude of the Greens and the Social Democrats, both of whom have deliberately ruled themselves out of government by setting conditions that cannot be met. They have put themselves in the same category as the various left-wing factions and individuals who have no interest in government and prefer the moral purity of opposition.

The Labour Party is in a different category. In the course of its long history the party has performed a vital function in the creation and maintenance of the institutions of the State whether through providing the opposition as it did in the 1920s, when republicans boycotted the Dáil, or subsequently participating in government as it did on a number of occasions at times of national crisis.

This time the party and its new leader Alan Kelly are in a quandary. Labour suffered so grievously at the hands of the electorate from its participation in the 2011 to 2016 government that there is intense opposition among members to going into coalition again. Varadkar and Micheál Martin are still hoping to persuade Labour to join or at the very least facilitate the formation of a government. It is a big decision which will be critical in determining if the party can grow again.