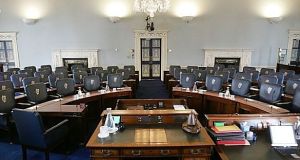 Representations including those from business and academia began before the general election. File photograph: The Irish Times

Lobbying has intensified to secure Seanad nominations for the Taoiseach’s 11 appointees as government formation talks continue.

Taoiseach Leo Varadkar and Fianna Fáil leader Micheál Martin have not discussed Seanad appointments because they do not yet know whether a third or fourth party will join, which will affect the number of seats each gets to decide.

They will, however, formally consider nominations once a programme for government is agreed.

Representations including those from business and academia began before the general election but former TDs who lost their Dáil seats in the February 8th poll joined the lobbying, which has further intensified following the completion of the Seanad election count last week.

After a shock result when Fine Gael returned no female Senators the Taoiseach pledged that most if not all of the party’s nominees would be female.

Informed sources suggest Mr Varadkar is considering rising Meath East Cllr Sharon Tolan who secured a good vote in the Seanad election as did Cllr Aisling Dolan in Roscommon-Galway, where the party now has no TDs.

Also being mentioned is Seanad candidate and Cllr Mary Seery Kearney for Dublin South-Central, where the party also has no TDs.

Consideration is being given as well to the Taoiseach’s Dublin West running mate in the general election, Cllr Emer Currie.

Some sources suggest Mr Varadkar may consider former TD Noel Rock for Dublin North-West and that he may “give a seat to the North”, with mention made of Ian Marshall, former leader of the Ulster Farmers’ Union who lost his Seanad seat.

Minister for Social Protection Regina Doherty has changed her mind about not staying in politics and is in a strong position for consideration as a nominee while Mr Varadkar may also consider nominee to the last Seanad Michelle Mulherrin who lost out on a Dáil seat in Mayo.

If civic society nominations are considered Covid-19 “heroes” are in the frame with some mentioning Dr Mary Favier, president of the Irish College of General Practitioners.

Attention has also focused on former Dublin Bay South TD Kate O’Connell whose omission from the party nominations for the Seanad election raised eyebrows. She fell foul of the party leadership and some see it as a test of whether Mr Varadkar is willing to show political forgiveness to a high-profile and articulate politician seen as capable of winning back her Dáil seat.

Speculation on Fianna Fáil nominations has focused on high-profile former TD Timmy Dooley who lost his Clare Dáil seat in the general election and did not secure a return to the Oireachtas in the Seanad election.

Senior Fianna Fáil sources say it is wrong to personalise it to Mr Dooley but others suggest that while he was at the centre of the Dáil voting controversy, he has made a significant contribution to the party over the years and everyone “deserves redemption”.

Former Cork South-West TD Margaret Murphy O’Mahony has been mentioned but her seat was retained by Fianna Fáil which lessens her chances of selection.

If Labour was in the running party sources suggest Limerick Cllr Conor Sheehan could be the nominee to help win back the seat held by Jan O’Sullivan.