‘No point’ in coalition with FG-FF without two smaller groupings 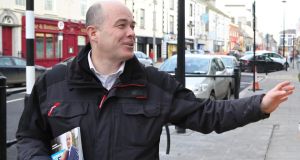 Denis Naughten: the Regional Independent group is only interested in “forming a government that can last five years”. Photograph: Joe O’Shaughnessy

A senior Independent TD has said there is “no point” in non-party deputies entering coalition with Fianna Fáil and Fine Gael unless it contains four political groupings and has a strong majority.

Roscommon TD Denis Naughten is a member of the nine-strong Regional Independent group of TDs which is seen as the most likely grouping to join a coalition involving the two Civil War parties.

Fianna Fáil and Fine Gael met again on Monday as they work towards publishing a framework document that will outline how a coalition between the two will operate.

They will meet again this week to finalise the document, which is understood to raise the prospect of much stronger State intervention in the health, housing and childcare sectors.

The Covid-19 crisis has seen the State temporarily take over large aspects of the private health system and pay the wages of childcare workers. One source said that, on childcare, it would be hard for a Fianna Fáil-Fine Gael government to undo what has been done in recent weeks, but added that such details have not yet been discussed between the parties.

Both Fianna Fáil leader Micheál Martin and Fine Gael leader Leo Varadkar hope to approach smaller parties and groupings when the framework document is finished in an attempt to build a broader coalition.

Between them, Fianna Fáil and Fine Gael have 72 seats, which is eight short of a Dáil majority. Mr Varadkar has said a third party is needed and Mr Martin has spoken of such a government needing a strong majority to deal with the fallout from the Covid-19 crisis.

However, the Green Party is continuing to advocate for a national unity government and Labour has thus far stuck to its position that it wants to go into opposition. The Social Democrats have said their policies would be incompatible with a Fianna Fáil-Fine Gael combination.

It has led some in the Civil War parties to suggest that a government may need to be formed with the support of Independents alone, but Mr Naughten said “There is no point in participating in that type of government.”

The former minister for communications has said the regional group has been clear it is only interested in “forming a government that can last five years”.

“Our view from day one has always been that there needs to be four legs to this stool – two big parties and two small parties or groups.”

“We don’t believe that is possible having a bare majority of 80 or 81,” he said. “We believe there is a need for another party to be involved.”

Mr Varadkar on Monday said “we need a third party, a third pillar as part of that government”, adding: “It’s not our view that we should try to bully any party into government.”

Meanwhile, the Dáil will sit in the Convention Centre in Dublin if a vote needs to be taken to elect a new taoiseach.

The business committee of the Dáil made the decision at a meeting on Monday where it was also decided that another restricted sitting would take place on April 16th.

The restricted Leister House sitting – with a set number of TDs from various parties and groupings only allowed attend – will see the Taoiseach, Minister for Health and Minister for Finance take questions.

The move to the Convention Centre would allow all 160 TDs attend the Dáil sitting and vote for taoiseach while respecting rules on social distancing.