Irishwoman whose mother died of coronavirus describes final days together 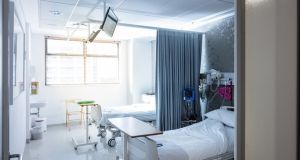 Siobhan Cullen has urged everyone to take very seriously the advice given about combatting the spread of the coronavirus. Photograph: iStock

The daughter of a woman who died in a Dublin hospital on Wednesday from the coronavirus, has spoken about having to visit her while wearing a hazardous materials suit and a protective mask.

Siobhan Cullen, daughter of Eileen O’Neill, of Loughlinstown, Dublin 18, who died in St Vincent’s Hospital after being taken there following a fall at home, said on her Twitter account that “never in a million years” did she think she would have to experience such a “nightmare”.

Ms O’Neill, who was 88-years-old, was taken by ambulance to the accident and emergency unit of the Dublin hospital on March 13th, after experiencing a fall in her home.

Because she had a high temperature, she was tested for the coronavirus and the result was positive, Ms Cullen said.

On Wednesday, she wrote on her Twitter account: “At 15.20 today I said goodbye to a warrior. I could only hold her hand while dressed in a biohazard suit with double gloves, and double face shields. She struggled almost to the very end.”

She wrote that thankfully her mother was now at rest, but that the reality of the coronavirus epidemic meant funeral arrangements were outside the family’s control. “No-one can pay their respects.”

The previous day, also on Twitter, she wrote that she was “with her holding her hand. She’s really struggling. Please pray that she goes soon & peacefully.”

Ms Cullen said her mother had not left the house in weeks, and had only been in contact with six people, including her two carers, yet she had caught the virus.

In the hospital, she said, her mother was put in total isolation once she had tested positive, with people “in space suits” coming in and out.

On March 13th, Ms Cullen tweeted that her mother had been taken to A&E in an ambulance, and that visitors were not allowed.

She wrote later on the same day: “Finally made contact. Not a stroke but being tested for the unmentionable. Results tomorrow eve at earliest. No visitors. In isolation.”

The next day she wrote that her mother was in an isolation ward and was being treated for a severe infection.

On March 15th, she wrote: “Staff run off feet. She’s very poorly today. Finally got hold of a nurse who said would ring me in 5 mins. Not their fault.” And then: “Just rang. Mother positive.”

She thanked those who responded on Twitter with messages of sympathy, and said the hardest part was knowing how poorly her mother was, but not being able to see her or hold her hand, while finding it difficult to get information.

On March 16th, she wrote: “So am now in self isolation. Can’t even walk dog in middle of night. Urgent request for test gone through. Will update as it happens as this is new experience for us all. I’m to get a call.”

The same day she wrote that her mother had been moved nearer to the nurses’ station so she could be watched more closely, and that she was wheezing very badly on the phone. She died two days later.

Contacted by The Irish Times, Ms Cullen said she was so upset she could not speak about what had happened.

She has urged everyone to take very seriously the advice that is being given about social isolation and the effort being organised to combat the spread of the coronavirus.

Ms Cullen posted a link to the death notice for her mother, who was pre-deceased by her husband, Michael, and is survived by her son, daughter, two in-laws, four children, her brother, and nieces and nephews.

“Funeral will be strictly private,” it states. “A memorial mass to honour Eileen’s life will be held in the future.”

On Friday, on her Twitter account, Ms Cullen said her late mother’s two carers, and her public health nurse, had all tested negative for coronavirus. She said she and the others who had been in close contact with her late mother were still waiting to be tested.