Patrick Honohan: Coronavirus is no excuse for repeating errors of financial crisis

In 2010, EU policymakers hesitated – with Covid-19, they must act decisively 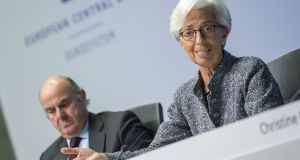 President of the European Central Bank Christine Lagarde with its vice-president Luis de Guindos: the timidity and suspicion of policy during the euro area crisis must be avoided. Photograph: Thomas Lohnes/Getty

In facing the sharp economic crisis that is spinning out of the pandemic, European fiscal and monetary policymakers must not forget lessons learned in the 10 years since the euro area crisis got under way. There can be no excuse for repeating the errors that were made then.

In March 2010, as investors fled Greek debt, European policymakers hesitated to deploy the resources at their disposal in sufficient quantity or with a sufficiently clear end in mind.

It is a moment for rapid, strong and all-embracing official policy to ensure that the economic side-effects of the pandemic are contained

Instead of maintaining an expansionary stance, fiscal policy was being reined in prematurely. Monetary policy remained gestural – and sometimes gestured in the wrong direction.

The recession that followed spilled over domino-like from one euro area country to the next. It has had lasting effects on economic welfare and the political environment. It was more than two years before the situation was brought under control and another few before economic activity had returned to its previous peak. The damage was most severe in the countries whose macroeconomic and financial policies had been most mishandled in the boom, but the effects spread throughout the zone.

The coronavirus pandemic is quite different in its source, and in its geographical spread. This gives some basis for optimism that there can be an effective collective response to what is truly an exogenous shock. There should be nothing comparable to the corrosive finger-pointing that so divided Europe last time.

It is a moment for rapid, strong and all-embracing official policy to ensure that the economic side-effects of the pandemic are contained and equitably shared. Europe has the capacity to do this; but in order to be successful, the timidity and suspicion that characterised too much of policy during the euro area crisis must be avoided this time.

Action is urgent for at least two reasons. The first is to cauterise the flow of business and household economic pessimism before it becomes self-fulfilling. Investors have woken up to the growing penetration of the pandemic and the social distancing measures necessarily adopted, and have begun to take steps to limit their exposure. The resulting sharp decline in the prices of stocks and the turbulence in the bond markets in recent days could prompt businesses to overreact defensively.

The huge cost of all this will impact what are, in many countries, already elevated government debt ratios

The second reason for policy action is the need to cushion the impact of recession on workers and on small businesses. Large government interventions are rightly being rolled out to ensure that individuals are not penalised for their involvement in the collective action to slow the progress of the virus. Safety nets are being strengthened for those who lose income because of illness or school closures. For small businesses, moratoriums on debt foreclosures are being added to by special loan guarantee programmes and wage subsidies to augment the flow of working capital needed by these firms to ensure that they are not forced into socially disruptive bankruptcy. This is not the time to fuss about the moral hazard created by such programmes (though governments will want to ensure that what results is not tilted to being a bailout of the prosperous).

The huge cost of all this will impact what are, in many countries, already elevated government debt ratios. It is here that the full financial power of Europe needs to be brought into play.

In one week, the cost of borrowing by the Italian government has already jumped by one percentage point on market fears that new open-ended pressure on the public finances would have to be borne by Italy alone, without collective support.

Urgent action by European leaders is needed to quash such suspicions. For example, there could be a massive expansion of European Investment Bank funding of these costs.

The European Central Bank has a clear, immediate role.

It could unleash its Outright Monetary Programme (“whatever it takes”) of asset purchases if Italy were to apply for an International Monetary Fund-style programme. But further asset purchases do not need to wait for that.

Energetic use by the ECB of the additional flexibility agreed last week for its public sector purchase programme (quantitative easing) can and should stifle any unwarranted market pressures that threaten to disrupt the financial markets. Spurious legal reasoning must no longer limit purchases.

There is something to be said even for taking a leaf from the Bank of Japan’s playbook and aiming to cap sovereign spreads at their current levels for the duration of the crisis.

If ever there was a time for the monetary and fiscal institutions of the European Union to pull together, this is it. There will be no excuse for repeating the errors of such a recent past.