A security crisis in the Gulf state would be felt in boardrooms and finance ministries all over the world. 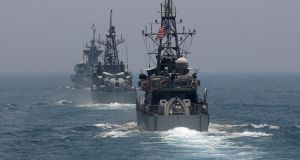 Military ships are seen during a naval exercise by US and Qatar troops in the Arabian Gulf, Qatar, June 16, 2017. Qatar has reason to be thankful for the large US military presence in the country. Were it not for that, the Qataris would be much more vulnerable to a Saudi-led military intervention. REUTERS/Naseem Zeitoon

For the past six years, there have been two Arab worlds. The world of violence and tragedy; and the world of glitz and globalisation. Syria, Iraq, Libya and, to a lesser extent, Egypt - have been engulfed by conflict. But Qatar, Abu Dhabi and Dubai have prospered as global hubs for travel, leisure, business and finance. The booming Gulf metropolises seemed untouched by the violence in the rest of the Middle East. They even profited indirectly, as safe havens in a region in turmoil.

But the wall between the two Arab worlds is breaking down. Saudi Arabia, Bahrain, Egypt and the United Arab Emirates (which includes Abu Dhabi and Dubai) have imposed a blockade on Qatar - claiming that the Qataris have been supporting jihadi movements across the region, and particularly in Syria and Libya. As a result, the illusion that the wealthy Gulf could remain uncontaminated by the wider conflicts in the Middle East has been shattered.

The obvious question is whether the dazzling rise of the Gulf states could be followed by an equally dazzling fall. If that were to happen, the implications would be global.

One of the reasons that the world has been able to look on with chilling indifference as Syria and Libya disintegrate is that neither country plays a major role in the world economy. But that is not true of the Gulf states. A security crisis there would be felt in boardrooms and finance ministries all over the world.

Although they are tiny places - Qatar and the UAE have populations of 2.2m and 9.1m respectively - the Gulf states play an outsize role in the global economy. Qatar is the world’s largest exporter of liquefied natural gas. The Qatar Investment Authority holds large stakes in important western companies such as Volkswagen and Barclays - and has also invested its petrobillions in trophy assets around the world, including the Shard, London’s tallest building, and Harrods department store. The Qataris are also due to host the football World Cup in 2022.

Dubai, meanwhile, has cleverly leveraged its proximity to Europe, South Asia, Africa and Russia to turn itself into the playground of the Middle East. The world’s tallest building, the Burj Khalifa, stands in downtown Dubai and Emirates airline is one of the largest in the world. The Abu Dhabi Investment Authority controls assets of more than $800bn, which makes it the second-largest sovereign wealth fund in the world - and one of the world’s largest property owners.

And then there is Saudi Arabia - the biggest and most powerful country in the region - whose status as the world’s largest oil producer has long underlined its significance to the global economy.

It is hard to believe that the Gulf elites would risk their pleasantly privileged lives by plunging into conflict. But even before the Qatari crisis, tension has been rising in the region.

The Saudi and Emirati complaint that the Qataris have been funding jihadis across the region has been echoed by western officials. But the argument that this dispute is solely about terrorism is undermined by the fact that the Saudis themselves have been notorious for exporting and promoting the Salafi ideology that underpins jihadi movements.

The reality is that the Saudis have long resented Qatar’s successful efforts to strut the international stage as an independent actor - something symbolised by the country’s sponsorship of Al Jazeera, which has provided a platform for the Muslim Brotherhood, a group detested by the Saudis. Saudi Arabia also believes Qatar has got far too close to Iran.

This fear of rising Iranian influence across the region has already led the Saudis and the Emiratis to go to war in neighbouring Yemen - with grim consequences for the civilian population. One ironic consequence of the blockade of Qatar is that it could force the country to get closer to Iran.

Under normal circumstances, the US would do its utmost to smooth over a dangerous dispute between its Gulf allies. But these are far from normal times in Washington. Donald Trump has taken the Saudi side in the dispute - indeed the US president may well have given the green light to the Saudi-led blockade, during his visit to the kingdom last month.

By contrast, the State Department and the Pentagon are clearly trying to play a more neutral role, not least because Qatar is host to the largest American air base in the Middle East.

Qatar has reason to be thankful for the large US military presence in the country. Were it not for that, the Qataris would be much more vulnerable to a Saudi-led military intervention. Even so, it is unclear whether the Saudis and Emiratis have a plausible endgame in mind, short of total capitulation by Qatar. If that is not achieved in short order, the risks of a military conflict will remain and the economic damage from the blockade will grow and contaminate the region.

For residents and tourists in the Gulf, the wars in the Middle East have been taking place in flyover country - places that they can glance down at from thousands of feet, as they take their Emirates or Etihad flights to Europe or the US. But the Qatar crisis suggests that the days when the tragedies of the Middle East could be kept at a safe distance from the booming Gulf may be over.

1 Restarting Ireland: When and how will we ‘get back to normal’?
2 TV Guide: 24 of the best TV shows to watch this week
3 Coronavirus: Trump warns of ‘a lot of death’ in United States next week
4 Coronavirus: Situation in Ireland ‘misrepresented’ because of limited testing
5 Mary Lou McDonald: This crisis shows that Sinn Féin was right
Real news has value SUBSCRIBE