Varadkar and Donohoe should talk to Yanis Varoufakis 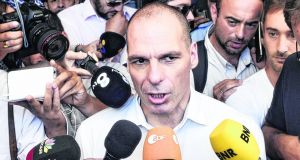 Yanis Varoufakis’s motto was “If you cannot imagine walking out of a negotiation, you should not enter it.” In the end, he was thrown out for trying to discuss the emperor’s new clothes. Photograph: Milos Bicanski/Getty Images

It is inconceivable that an Irish finance minister would resign on a question of principle. But Yanis Varoufakis, the Greek finance minister from January to July 2015, did just that, having failed, in his words, to liberate the Greek people from the “postmodern workhouse” of a debtor’s prison created by the European institutions.

Two years later, why is this topical? Because, in his new book, Adults in the Room, Varoufakis blows the whistle on the charade of the Greek bailouts by the troika of the EU, the European Central Bank (ECB) and the International Monetary Fund (IMF). His account is a warning to any small economy that hankers after self-determination. Ireland may have survived the crisis, but new heads on the European block like Leo Varadkar and Pascal Donohoe should nevertheless be wearing brown trousers while reading this.

The moral is: don’t step out of line, trust no one and never, never, tell the truth. The whole book illustrates the dictum of Jean-Claude Juncker (president of the European Commission): “when it gets serious, you have to lie”.

Despite his insufferable arrogance, Varoufakis is infuriatingly correct in his prognoses. His reportage of meetings with the EU officials and his opposite numbers at euro zone meetings makes it painfully clear that ruthless figures such as Germany’s finance minister Wolfgang Schäuble, the IMF’s Poul Thomsen and the European Commission’s Declan Costello dictate to weaker functionaries like Mario Draghi (ECB) and Jeroen Dijsselbloem (the ineffective president of the euro zone).

The only one to emerge from Varoufakis’s pen unscathed is the IMF’s Christine Lagarde, whom he sees as “intelligent, cordial, respectful”. Well, she would be, wouldn’t she, when like all chief executives she keeps a bulldog, Thomsen, to do her dirty work.

Thomsen is painted as a two-faced careerist, admitting in private that the IMF solution to the Greek crisis was entirely wrong and bound to fail, while in public adopting the hard-line mantra: meet the terms of the (unperformable) bailout or we will destroy you.

Costello, described to Varoufakis by an unnamed Irish ambassador as “an un-Irish Irishman”, headed the European Commission’s team in Athens and is denounced by Varoufakis as a manipulator par excellence, infiltrating the Greek administration and suborning Varoufakis’s own deputy.

The blatantly domineering Schäuble, intent, as Varoufakis sees it, on creating a Europe in Germany’s image, bullies the satellite states, including Ireland’s Michael Noonan, into voting against Greece and against the best interests of a democratic Europe.

It is this lack of accountability, democracy and dialogue that is at the heart of Varoufakis’s struggle with the European machine. He rampages against “the power of hidden information” and “the terminal breakdown of networks of power that fashion our lives”, calling the European approach to the Greek crisis “the world’s greatest bankruptcy cover-up”.

With the support of premier Alexis Tsipras and Syriza (of which he was never a member), Varoufakis set out on “a long, lonely campaign against the most highly weaponised and best-prepared creditors in the history of capitalism”. Inevitably he lost, not least because Brussels and Berlin succeeded in splitting the Greek cabinet, taking over key ministries, presenting bureaucratic obstacles at every turn and telling Varoufakis lies that he believed.

Varoufakis’s motto was “If you cannot imagine walking out of a negotiation, you should not enter it.” In the end, he didn’t walk out: he was thrown out for trying to discuss the emperor’s new clothes.

- most of the bailout monies go back to the IMF and ECB as repayments on Greece’s debt, almost none of it goes to relieve austerity which is driving Greece ever deeper into recession

- Schäuble and the IMF still see a Grexit as inevitable

- Schäuble has complete contempt for the democratic process and

- Schäuble’s ambition is to get the troika into the French finance ministry.

Varoufakis fully acknowledges that the crisis was due largely to the oligarchy which controls the Greek banks, the media and, until the election of Syriza in 2015, the political system. It is this oligarchy which Syriza pledged – and has failed – to destroy.

Greece is in a situation infinitely worse than Ireland because it has a chaotic political system, no wealth-creating industry, no multinationals and no IFSC. The days of the “Brussels begging-bowl” and the béal bocht are long gone.

Varoufakis may be a brilliant economist and idealist but he is also totally naive, completely unsuited to play the cute hoor. He was an unwilling politician, cajoled into the job by Tsipras who is the eternal vacillator, “a lazy thinker”; unlike his finance minister, he has avoided falling on his sword. Even today, Varoufakis somehow finds it possible to credit Tsipras with sincerity.

Effectively, Tsipras, dithering between principles and politics, ideals and reality, hung his friend out to dry. What Irish taoiseach would do that?

Richard Pine is an Irish writer and lives in Corfu