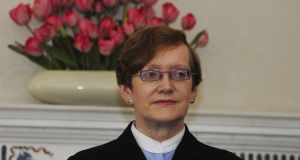 Attorney General Máire Whelan SC, who was nominated by the Government this week for appointment as a judge of the Court of Appeal. Photograph: Aidan Crawley

Through much of the 20th century, there was an unwritten convention that an attorney general would have first refusal on senior judicial positions. Many fine attorneys, including Cearbhall Ó Dálaigh and Declan Costello, went straight to the bench. But since the political crisis surrounding Albert Reynolds’s selection of Harry Whelehan as High Court president in 1994, the practice has fallen into abeyance.

As a principle there is nothing wrong with an attorney general becoming a senior judge. Máire Whelan, who was nominated for a post on the Court of Appeal at Enda Kenny’s final Cabinet meeting as taoiseach this week, is an experienced and eminently qualified senior counsel. Serving as chief legal officer to the Government should not be a bar to judicial appointment.

But context matters. In particular, given the well-rehearsed controversies over judicial selection, transparency is essential. So the opaque circumstances surrounding Whelan’s nomination raise serious questions about how the Government – its personnel largely unchanged after Taoiseach Leo Varadkar’s reshuffle – does its business. And its refusal to answer basic questions in the days since the announcement only makes things worse.

Those questions should be easy to answer. Did the Government ask the Judicial Appointments Advisory Board (JAAB) to advertise the vacancy? The board sought applications for a position on the Court of Appeal in January but the Government made no nomination to that court until now. Why the six-month delay, not least at a time when the court is facing a huge workload? Why was the JAAB not in a position to recommend a single name to the Government? If Whelan was interested in the position, why did she not apply through the JAAB?

A second set of questions concerns the Government decision itself. Who was in the loop? If several High Court judges told the Government they were interested in the position, what did the attorney – the agreed contact point for those expressions of interest – do with that information? Finally, did Whelan recuse herself from the Cabinet discussion on her nomination?

The rushed and secretive approach is typical of the Government’s approach to judicial selection. Its Bill to reform the area was inspired not by rigorous research or wide consultation but by a political need to indulge the Independent minister Shane Ross. Although the focus has been on the shortcomings of the JAAB, the bigger problem has always been political patronage, in particular for lower court vacancies, further up the chain in Government.

Varadkar has a choice: maintain the omerta over Whelan’s nomination and get his Government off to a bad start or turn over a new leaf and answer those questions.