Diarmaid Ferriter: Will anyone stop another housing bubble? 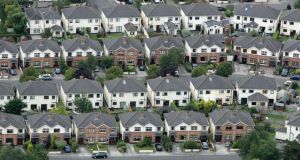 The sharp rise in prices and lending raises concerns that another bubble may be forming, according to the OECD. Photograph: Frank Miller

There were numerous housing narratives swirling around this week; only one of them seemed positive and all of them require robust political engagement, which seems unlikely.

There was a report in the Sunday Business Post that the State’s plan to sell one-quarter of AIB could see the bank “ramp up loan sales and repossessions after it exits full State ownership”.

There was a warning from the OECD that “the sharp rise in prices and lending raises concerns that another bubble may be forming, and the authorities should stand ready to tighten prudential regulations if needed”.

As Enda Kenny prepares to depart, there is the legacy of one housing bubble unresolved

At the same time, the Fiscal Advisory Council (established to “institutionalise the memory of the crisis”, according to its previous chairman, economist John McHale) suggested a sharp rise in the number of new homes being built would risk overheating the economy.

Meanwhile, Independent TD Mattie McGrath said he would seek cross-party support for a Private Members Bill to establish an off-balance sheet national housing co-operative “whose sole intention will be keeping families in mortgage distress in their homes”.

The national housing co-op Bill, which has been submitted by McGrath and Fianna Fáil’s John McGuinness, has the backing of Fr Peter McVerry, and the Right2Homes organisation.

As Enda Kenny prepares to depart, there is the legacy of one housing bubble unresolved and warnings of the possibility of another. Kenny is the Taoiseach who insisted we should never return to the culture that “pushed us over the edge”.

Will the legacy of that culture be tackled? Or the danger of another bubble confronted?

McGrath’s comments on the quest for cross-party support are interesting: in March 2016, Fianna Fáil’s finance spokesman, Michael McGrath, made much of the idea that action to deal with vulture funds would be a priority for the party in the new Dáil because: “We have already seen vulture funds use underhand tactics to trigger default on the part of borrowers in an attempt to gain control of very valuable assets.

“There is a real risk that action of this type will be stepped up once these funds feel that the political backdrop is more favourable for the . . . vulture funds who outsource the administration of loans still control key decisions such as initiating action for repossession or raising the interest rate that applies to the loan . . . There is also very legitimate concern that loans may be sold more than once with each subsequent transaction resulting in a deterioration of the conditions of the borrower in respect of the interest rate, penalty charges and the status of any restructuring arrangement.”

The Bill that Mattie McGrath and McGuinness submitted seeks to establish a new housing co-op as a standalone entity that will acquire all principal dwelling house loans and buy-to-let residential loans in arrears more than 360 days.

McGrath explained: “We are aware that changes to legislation may be required and that the Government may have to seek some flexibility with respect to the existing European Central Bank fiscal rules; but all of this is achievable if the political will is there.”

Is the political will there? Will Fine Gael confront the vulture fund dilemma? And the implications of the AIB sale? Where does Fianna Fáil stand on all this? Why did John McGuinness but not his party submit the Bill?

Can we believe politicians and economists who blithely dismiss talk of a new bubble?

In mid-May Kitty Holland reported that McGuinness had presented the Bill to Fianna Fáil, emphasising that the new co-op would occupy the role currently being filled by vulture funds.

Like them, it would buy mortgages at a write-down and “only homeowners who cannot pay their mortgage for reasons beyond their control will be eligible for the scheme.

“They would become tenants of the co-op with an option to buy the dwelling back at any time during the lifetime of the original mortgage, at the price the co-op paid for it plus interest . . . If we don’t do something to stop these vulture funds buying all the distressed mortgages, as a country we are going to end up in a terrible situation . . . The time has come to take a bold step.”

He said such a model had the added advantage of keeping the repayments or rent paid by the household within the State, rather than transferred to external funds.

So why the silence from Fianna Fáil, the party that built much of its support base historically by championing the “men of no property”?

In January, Stephen Donnelly, now a Fianna Fáil Deputy, pointed out that tax loopholes availed of by the vulture funds were “closed down largely because of the work of parliamentarians” including himself, Pearse Doherty and Michael McGrath, with McGrath insisting Fianna Fáil would not support the finance Bill if the loopholes were not closed.

Is such work going to continue to protect vulnerable homeowners? And, based on past experience, can we believe politicians and economists who blithely dismiss talk of a new bubble?