Cliff Taylor: Varadkar will find it hard to get stuff done 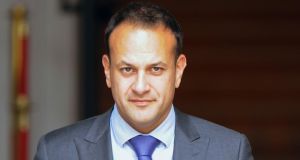 Leo Varadkar hasn’t got a bag of money to spend on spending increases and tax cuts in the October budget. This will complicate one of the key tasks he faces: to get “stuff” done, whether it be in health, housing or the other key priority areas. All this is within the context of the most vital economic challenge: to prepare for Brexit, a hugely difficult job given that, a year on from the referendum, we are still not sure what Brexit actually means.

There is now talk of a need for political consensus in the UK between the Conservatives and Labour on an approach to Brexit. Given the scale of what’s involved, we need something similar here. Could this be achieved by deepening the agreement between the Government and those supporting it in the Dáil? Or by some other process ?

Fianna Fáil leader Micheál Martin was correct when, speaking on the election of the new Taoiseach, he referred to “a wasted year of delay” in the Dáil. New politics as currently constructed simply does not allow progress at anything like a sufficient pace.

We might get away with it if the road ahead looked clear. But Brexit looms and the new Taoiseach will know that the task of national preparation now needs to accelerate. Enda Kenny’s long goodbye has put too much on hold.

Time is short. The new Taoiseach needs to set Brexit preparation as the key economic priority. And he needs to explain what that involves, which is preparing in case the worst happens on Brexit – while hoping it does not – and also focusing on the key areas where economic competitiveness can be improved.

His first job is to stop the budget debate descending into the usual row about how we use the limited extra money available for spending increases and tax cuts. In each of the recent years, political debate has disappeared down this rabbit hole, arguing endlessly over the allocation on tiny amounts of cash. On current estimates the additional resources available on budget day may not be much over €550 million and the public pay deal will reduce this further

Total annual spending voted through the Dáil is now about €55 billion. We are at risk of spending our time arguing about 1 per cent of the pie, while the real action is getting value from all that we spend. Better to take the heat out of budget day and use the political energy to try to figure a way forward on housing, or on getting the rural broadband plan delivered.

With the Brexit threat on the horizon, prioritising what to do is crucial. But equally important is getting on and doing it. Surely one of the key things which has turned people off politics is that it can’t seem to get things done. Every Minister for Health promises to cut waiting lists and do away with trolleys. And in turn they all fail.

This is in part the result, no doubt, of the short time span of our national politics – and its local focus. When the reappointed Minister for Transport, Shane Ross, glories in the prospect of a Garda station reopening in his constituency, we know that delivering for the constituents is not the preserve of rural TDs. If the Cabinet still has to be constructed at least in part on the grounds of regional balance, rather than talent, is anything really going to change?

The new Taoiseach has a potentially short window and would probably be wise to pick a few targets. The new infrastructure plan, to be put forward by Minister for Finance Paschal Donohoe, will be vital.But persuading people that something will actually happen will be vital. It took four years to build the Luas cross-city link in Dublin. Goodness knows how long the children’s hospital will be from the first plans to completion. The idea was first mooted in 1993, and even if you go back to the first planing application in 2015, competition is likely to take another six or seven years. The broadband plan, meanwhile, is subject to seemingly interminable delay.

Rebuilding and developing our infrastructure is vital to our long-term economic future. A plan to achieve this is thus important in itself and part of it must involve a way to get things done more quickly and avoid local politics intervening.

Developing our infrastructure is also an important part of our long-term response to Brexit, as it helps build a competitive economy. But Brexit brings short-term threats, too. The latest political developments in the UK seem to push the likely outcomes to the two extremes – either a softer Brexit, as the Conservatives change tack after the election, or a crashing out without an agreement, if UK politics simply can’t get itself together.

It seems to make sense for the new Taoiseach to hope for the best, but prepare for the worst. He needs to set the job preparing for Brexit as the number-one economic priority, ideally based on some political consensus.With so little spare cash in the budget anyway, surely best to make a virtue out of necessity and aim to eliminate borrowing next year, to give ourselves as much flexibility as possible in case Brexit goes wrong. We should still be able to do this while upping investment spending. But it would mean tight control on day-to-day spending and no net tax cuts.

Can the new Taoiseach get consensus around this as a key part of our Brexit preparation? Or are we going to spend the next four months arguing over where a paltry few extra hundred million will be spent and ignoring the train speeding towards us?