Northern politicians must sort out their own problems

Surely the point of the Belfast Agreement was the opportunity afforded for self-determination? 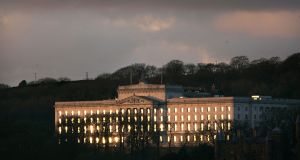 Stormont. Footage this week of April 1998 was a reminder of all the revisions and ironies that have squeezed the SDLP and the UUP out, despite their efforts in getting the agreement over the line. Photograph: Dara Mac Dónaill

I thought of Thin Lizzy during the week as the aged peace process boys were back in town but there was little dancing in the moonlight 20 years on from the Belfast Agreement. Instead, the 20th anniversary, despite the jaded poetic rhetoric of Bill Clinton, has been characterised by the more depressing dancing to history’s tune, the title of a book by Brian Walker in 1996 which underlined the selective plundering of history and myths to justify nationalist and unionist partisanship. That Walker’s book appeared before the agreement makes its ongoing relevance all the more dispiriting.

One of the many complexities of Northern Ireland is that the current stranglehold on its politics by Sinn Féin and the DUP does not seem to reflect the true range of Northern sentiment as revealed, for example, in the 2016 Northern Ireland Life and Times (NILT) survey, which found that 46 per cent of those surveyed saw themselves as neither unionist nor nationalist. The 1998 agreement never created the momentum that would see such middle ground prosper in terms of politics and government.

David Mitchell’s book Politics and Peace in Northern Ireland (2015), which looked at each of the five Northern Ireland political parties that have served in the powersharing executive, examines the idea of the participants as fatalists (fearful), mitigators (co-operative) or transcendors (trusting). The first category seems most relevant to pre-1998, the second one to the period 1998 to 2007 and the third to post May 2007 when the devolved DUP-Sinn Féin-led government emerged. In truth, however, Northern politics sits uneasily into any designated categories, one of the reasons why the Alliance Party faces great difficulties in making an impact with a designation as neither unionist nor nationalist, but “other”.

Footage this week of the heady days of April 1998 was a reminder of all the revisions and ironies that have squeezed the SDLP and the UUP out, despite their efforts in getting the agreement over the line. In Mark Durcan’s memorable phrase, the SDLP, as Sinn Féin thrived, became the “prodigal son’s brother” because of the overwhelming and crucial goal of ending violence. As Tony Blair recorded in his autobiography, one of the complaints of the SDLP at the time of the negotiations was “if we had weapons you’d treat us more seriously”.

In relation to the UUP and the DUP, there is a historical parallel in the way that anti-treaty republicans in the Free State after the 1920s were able to ironically prove the veracity of the assertion made by Michael Collins: that it was worth accepting the treaty as a starting point and a chance to transform Anglo-Irish relations. Having rejected that argument, Éamon de Valera subsequently went on to prove its worth, in much the same way as the DUP was able to ultimately benefit from an agreement it derided.

There is an irritating vanity to Blair’s account of his involvement in the negotiations in 1998 and how he “personified the opportunity to escape our history”, but where lies the escape route now? He was correct during the week to highlight a current lack of British focus, but the old boys being back in town was also a reminder of the continuing but faltering dependency on others to do the cajoling. Surely the whole point of the 1998 agreement was the opportunity afforded for self-determination?

Interestingly, when Blair arrived in Belfast in 1998 he was stuck by the grandeur of Stormont which he suggested was “typical of the extraordinary buildings with which Britain told the rest of the world of its own importance”. But that was not the case; as I’ve highlighted previously, the building of Stormont in the early 1920s was about Ulster, not British pride.

During its construction, the first prime minister of Northern Ireland, James Craig, was in constant contact with the Office of Works about the design of concrete fencing posts and architectural features for Stormont Estate. He made numerous trips to London to discuss progress and insisted it was imperative “not to go along lines which would appear to the outside world as though we in Ulster itself placed a minor importance on our institution and felt that a small trifling and niggardly treatment of the subject was sufficient for the Ulster people”. Craig got his way.

More recently, Martin McGuinness and Ian Paisley were able to agree that to share power was infinitely better for Ulster than dancing to a tune played by others.

Reacting to the Belfast Agreement in 1998, journalist Mary Holland, who had provided insightful coverage of the North for 30 years, noted that despite the achievement there was still a fear “that the accord is full of contradictions and that it must eventually self-destruct”. The creative ambiguities essential to get an initial agreement do not solve the long-term problems, but they can only be cleared if, 20 years on, the notion of self-determination can once again be prioritised.