Kathy Sheridan: Women must not turn on each other 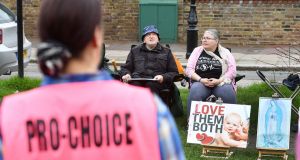 As well-meaning men talk about staying home and leaving the referendum for women to decide, it’s important to remain alert to a significant minority whose continuing influence rests on the humbling of women. Photograph: PA

The principal reason for devouring every morsel of the Belfast rape case, we tell ourselves, is that it generated an important national debate. There is certainly truth in that. Another truth is that the salacious details became addictive. On occasions when our industrious reporter Conor Gallagher halted his Twitter updates from the court, dismayed followers clamoured to know why. Why had he withdrawn the drip? (The court had adjourned for lunch probably).

Another truth is that the case probably generated almost as many charged silences and exchanges between women as between any other groups. There’s nothing new here. History shows that the ranks more comfortable with the status quo have always had a heavy representation of women.

That unwavering human tendency to take away only the elements that reaffirm your world view was show in sharp relief in the Belfast case.

This is not the preserve of any age or gender but at a time when many good men are stepping up openly and generously to support women, it becomes a little harder to understand. The number of women who wondered aloud what the complainant was doing in that Belfast house in the first place – a rhetorical question of course, accompanied by a meaningful pause – became quite alarming.

Women her mother’s age became judge and jury of that messy, awkward, horrifying world of a teenager who had failed to anticipate that the darkest, most humiliating details of her young life would some day be blasted across a national audience.

On a Dublin flight, a middle-aged, country woman discussed the cases with a female pal across the aisle, so loudly and aggressively, that my companion took notes.

The way they talk about those Derry sluts in the Whatsapp group . . . Act like a slut, they treat you like slut – you know”. Less a discussion than a merciless, old-style tarring and feathering

“Rugby lads are wild and all that but they don’t cross those kind of lines you know,” she decreed firmly. Same woman a few minutes later: “The way they talk about those Derry sluts in the Whatsapp group . . . Act like a slut, they treat you like slut – you know”. Less a discussion than a merciless, old-style tarring and feathering.

Plenty of women would have acquiesced with the view if not the language. Strenuous mental acrobatics then must be required to square this with the view of say, former Ireland head coach, Eddie O’Sullivan. On hearing Willie John McBride opine that it was time “these young men got back doing what they do best” (back to the IRFU and Ulster Rugby), O’Sullivan thought it “so divorced from reality that it was beyond embarrassing”.

McBride “is one of the greatest captains in the game’s history”, O’Sullivan wrote in the Times, “. . . he is also guilty of lacking empathy and grossly misunderstanding the gravity of this situation . . .”

We forget that some women are equally prone to such views. We know that juries with a male majority are more likely to convict in sexual assault cases. We know that more than half of white American women voted for Donald Trump, a man who in the words of former FBI director, James Comey, “talks about and treats women like they’re pieces of meat... [a person] not fit to be president of the United State, on moral grounds”.

The story sadly is as old as time but this might be an opportune time to acknowledge it and how such conditioning feeds into public policy. Writing in these pages yesterday, Margaret Hickey, a writer, practising Catholic and activist in the current Pro-Life Campaign, declared herself “totally at ease with an all-male priesthood” while reasserting the perception of Mary Magdalene as a woman whose only service was to wash the feet of Jesus.

Aside from the large question mark over that characterisation of Mary Magdalene, the urgent practical matter of a dying male priesthood and the increasing alienation of women – who, she concedes “tend to be involved to a greater extent than men in church activities” – she insists that ordaining women “would not achieve the paradigm change Mary McAleese and indeed others within and without the church are calling for”.

A recent letter to the editor – from a woman – chimed with this view, finding McAleese guilty of “hubris”. In other words, a former, deeply respected head of State with a string of relevant qualifications has grown too big for her boots.

In normal times, this would all be of limited interest. But as well-meaning men talk about staying home and leaving the referendum for women to decide, it’s important to remain alert to a significant minority whose continuing influence rests on the humbling of women.

This referendum is about more than abortion.