Women, war and revolution – An Irishwoman’s Diary on Sarah Mellows and Julia Morrissey 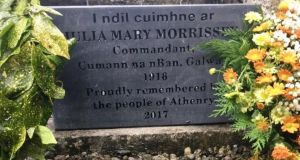 Sarah Mellows was seriously struggling when she sent a letter to her priest, seeking a loan of “a few pounds for a month or so”.

“Few are my friends and visitors these days, so this sickness is a poor thing and an added expense”, she wrote, back in 1949.

She was managing the rent with the help of a small group of old “comrades”. What terrified her most was not so much her indisposition, as the fact that her burial insurance had lapsed.

“Very lonely without anyone to speak to” was how she signed off. Less than two years later, she had slipped away for good, having spent the last 10 years of her life on her own. Her husband, William, who was in the British army, and two of her sons, Liam and Barney, had pre-deceased her.

Both young men had been in the Irish Volunteers, but the death that hit her hardest was that of Liam. He had been leader of the western division during the 1916 Rising, a Sinn Féin member in the first Dáil, an opponent of the Treaty, and one of four men executed by a Free State firing squad in December 1922.

A mother bereft is not something that springs to mind when passing the statue of her Lancashire-born hero son at the top of Galway’s Eyre Square. Similarly forgotten, until very recently, was another woman in his life, Julia Morrissey.

As NUI Galway (NUIG) historian Dr Conor McNamara records in a newly published study of the independence struggle in the west, Morrissey had initially been landlady to the fair-haired, frail republican leader with a keen sense of humour who arrived into east Galway in 1915. The pair shared a passion for politics, for she had founded an Athenry branch of Cumann na mBan, and loved music, with Morrissey playing piano to her partner’s violin.

In War and Revolution in the West of Ireland: Galway 1913-1922 (Irish Academic Press) , McNamara recounts how women of Co Galway – not all of them listed Cumann na mBan members – played a very active part in the lead-up to and week of Easter 1916.

Having relied on Roger Casement’s thwarted Aud delivery to the Kerry coast , Mellows led a poorly armed company of up to 800 men and women on a series of forays, attacking Royal Irish Constabulary barrack buildings in Oranmore and Clarenbridge, and taking the town of Athenry.

Hunger for land and livelihoods were driving forces in a sprawling county characterised by extreme poverty in the west and by what he terms “generational cleavages” between younger republicans and older generations of nationalists, and an “economic chasm” between landed and landless.

Though Yeats and Synge may have championed the “dignity of the rural poor”, he believes that An Spidéal-born writer Mairtín Ó Cadhain more accurately “laid bare” the “dark ambiguities, seething resentments and petty humiliations” of those who provided spailpín labour for their more wealthy counterparts.

Such was the determination of Cumann na mBan in Galway county that when the initial “euphoria” of Easter Week was fading, and far better equipped British troops were approaching, Mellows had another battle on his hands to disband the female volunteers, he writes. A “stratagem” had to be employed to make them “go home”, one former colleague recalled half a century later. “They were sent to the Hynes home in Cregaturla on the pretext of being needed for some martial project, and so were absent when the men marched away”. Only Morrissey remained.

Mellows spent four years in New York before his return and eventual execution. Morrissey never recovered from the shock, and neighbours recalled how she tried to make contact with him via a Ouija board. Sometime in the 1930s, she was referred to Ballinasloe for psychiatric treatment and remained there for three decades. The Military Service Pension Board posted forms out to her on three occasions but, because they were not returned correctly, she received no stipend.

When she was buried with her parents in Athenry’s Dominican Abbey in 1974, there was no surviving close relative to pay for Morrissey’s inscription. Last November, with McNamara’s support, a headstone was placed on her grave in Athenry, and a wreath laid by a group named Relatives and Friends of Galway 1916.

The historian’s narrative skilfully navigates a course through the hardship, brutality, reprisals, and detentions that characterised the War of Independence – and the “terror” wrought by Crown forces on Galway, which had provided so many recruits for the first World War.

Devoid of any hint of romanticism, his analysis records many quiet and personal tragedies, such as that of the young boatbuilder from Kilcolgan who suffered a breakdown while with the Volunteers during the course of Easter Week. He was cared for by Cumann na mBan members. Shortly after he returned home, he walked down to the sea early one morning, tied himself to an anchor and drowned.

Five tumultuous years later, by May 1921, an editorial in the Tuam Herald appealed for respite as “the country is bleeding to death, bleeding at every pore...”