Magaluf of the Midlands or Irish Taj Mahal? 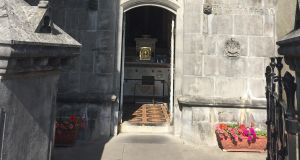 If the Costello Memorial Chapel has any claim to architectural fame, it is as the smallest of its kind in Europe

Strolling around Carrick-on-Shannon on Sunday, I was surprised to discover an Irish version of the Taj Mahal located among the shops and bars. It was not made from white marble. Nor was it anything like the size of the Indian Taj. On the contrary, if the Costello Memorial Chapel has any claim to architectural fame, it is as the smallest of its kind in Europe. But it serves the same purpose as Agra’s wonder.

That was built by the emperor Shah Jahan as a burial place for his “favourite wife”, Mumtaz Mahal, after her death left him inconsolable.

And despite a legend that he planned a second version, in black marble, for himself, he was buried alongside her there in 1666.

Carrick man Edward Costello was similarly bereft when his wife Mary died in 1877. So he commissioned the chapel as her permanent resting place, and his when the time came, which it did in 1891.

Since then, what the diminutive monument lacks in exterior drama has been compensated for by an unusual, and somewhat disconcerting, interior detail. Both coffins are on permanent display, in glass-covered recesses: hers looking rather worse for wear following a preliminary period of interment. Romantic as the monument is, in a way, it’s probably not the sort of romance that has made Carrick-on-Shannon synonymous in more recent times with certain kinds of pre-marriage ritual, namely stag and hen parties. In particular, I have heard the town described as the “hen capital of Ireland”: a fact about which not all the locals are delighted. And sure enough, farther along Main Street on Sunday, I chanced on an example of the phenomenon.

Instead of that, she became a Sinn Féiner and – even worse – a journalist

This being only 5pm, it was well behaved. Despite the sweltering temperatures, the only scantily clad part of the group was an inflatable man being carried by the maids-in-waiting. And even that was restrained. The inflated fertility symbol is not always a whole man, I gather: only part of one.

Still, I couldn’t help wonder what poor, pious Edward Costello would have made of this and the more raucous parties that descend on his town regularly now, making it the Magaluf of the Midlands.

Susan Langstaff Mitchell might have been better able for it. Another former native, and the subject of a more conventional memorial nearby, she was by nature a rebel. In fact, like many of the 1916 generation, she had first revolted against her own background (respectable Protestant) and “what I had hitherto known as society”.

Instead of that, she became a Sinn Féiner and – even worse – a journalist. As assistant editor of Irish Homestead, which published the early work of a promising young writer called James Joyce, she was known and feared for her parodic verse at the expense of Dublin celebrities. She also liked to sing it at parties, sometimes to the disgust of those who had not yet resigned from “society”.

The explorer Thomas Heazle Parke was also a Carrick man, as a plaque on the town hall reminded me. Or at least he grew up there, having been born on the Roscommon side of the Shannon. He is elsewhere commemorated by a statue outside the Natural History Museum in Dublin and by a relief sculpture underneath which shows him sucking arrow-poison from the chest of a British officer, whose life he thereby saved.

Fortunately, the worst thing I had to face was the notorious Sligo-Dublin train. Which, as usual, was running late

That was one of many dramas during the Emin Pasha Relief Mission of 1886-89, in which Parke became the first Irish person ever to cross Africa. But it was a generally disastrous adventure, claiming many lives. It claimed Parke’s too, eventually. He made it home but died a few years later, aged 36.

A less well-known journey of Parke’s earlier life was the one that, as a young doctor, took him from his native Carrick-on-Shannon to a job in Co Monaghan. By an odd coincidence, last Sunday, the former town was full of people who had trekked in the opposite direction, thanks to that latter-day cause of Irish exploration: the GAA qualifiers, which had thrown up a first-ever championship meeting between Monaghan and Leitrim.

For some of the travelling support, this had also meant a first-ever crossing of Cavan - always a perilous prospect for Monaghan people. I hope they made it back safely on Sunday night. Fortunately, the worst thing I had to face was the notorious Sligo-Dublin train. Which, as usual, was running late, although for once all on board could sympathise with the stated excuse.

In common with the rest of the country, its engine was overheating.