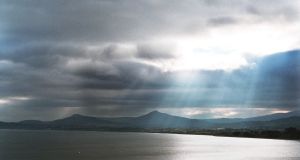 Even allowing for higher-than-average levels of sophistication in the south Dublin suburbs of Dalkey and Killiney, it seems remarkable that one of their best-known roads is named after a 17th-century Italian philosopher. Or at least that’s who I assume Vico Road was named after, although for the life of me I cannot now find anything anywhere about who named it, and why.

But Giambattista Vico was born 350 years ago today, in Naples. And that last detail would seem to explain how his name ended up in an area whose scenery has long been compared with the Bay of Naples, and which has several other Italian place-names, including Sorrento and Nerano, to match.

Perhaps Vico is a borrowed place-name too, and so only an indirect tribute to the philosopher whose peak years coincided with the Age of Enlightenment. But at the risk of stretching a point, you could argue that the topography of the road does somewhat mirror one of his big ideas.

Broadly speaking, he believed that history was cyclical and that it rose and fell in three ages: the divine, the heroic, and the human, followed by a ricorso (“return”) to where it started again.

There was a lot more detail to it than that, of course, which is why he influenced later political thinkers, including Marx.

But with the right audiobook, you could trace his theory while climbing the Vico Road out of Dalkey (the route’s “divine” section), then stopping to enjoy the view from the top (the “heroic”), before making the precipitous descent into anarchy, in the general direction of Bray. The ricorso, presumably, would be a north-bound Dart, by which you can retrace the route to Dalkey at sea-level.

Noted residents of Vico Road have included George Bernard Shaw, whose lofty Torca Cottage overlooked not just the bay, but also the road, to which it was connected by a steep walkway called the “Cat’s Ladder”. It was James Joyce, however, who took Vico’s ideas most to heart.

The Joyce family’s many Dublin addresses, representing a downward climb of another well-known ladder – the property one – did not include Vico Road. They did include Bray, famously the scene of a Christmas dinner row involving his father and an aunt named for another Italian genius (Dante, aka Mrs Riordan).

But in Finnegans Wake, Joyce embellished and reshaped Vico’s ideas about the rise and fall and rise again of civilisations. The book is cyclical too: it can be read as a 600-page loop, beginning and ending in the middle of the same sentence.

And as with those open-top Dublin tour buses, you can get on anywhere. But if you do start at Page 1, you may note a Latin lower-case cousin of Vico lurking in the description of Dublin: “...riverrun, past Eve and Adam’s, from swerve of shore to bend of bay, brings us by a commodius vicus of recirculation back to Howth Castle and Environs”.

I don’t know how Joyce pronounced Vico Road, but I’ve spent my life saying it with a long “i”, to rhyme with “psycho”, and I think that’s how most Dubliners say it too. Of course, being Italian, it should be rhymed with “eco” (as in eco-warrior). So if you’re ever invited to any posh parties in the area, remember to try that out. Alas I haven’t heard of any 350th celebrations for Giambattista there. They seem to be mainly in Naples.

For once, this summer, the South Dublin coastline’s Italianate comparisons have been complemented by suitable weather. Drive up Vico Road today or tomorrow and you could easily think yourself on the Amalfi coast. For added effect, you’ll probably be stuck behind a tour bus.

But Dalkey is not unique among Dublin suburbs in considering itself a little piece of Italy. The habit extends even to the northside, thanks to Marino. Back on the southside, there’s Portabello too. And there’s also Rialto, although there, any comparisons with Venice begin and end with a joke.

A spur-line of the Grand Canal used to run through the suburb, to St James’s Gate. It carried Guinness barges, not gondolas. But when a new bridge was built, it was nicknamed for the one over the Venetian Grand Canal, although they had little else in common.

The joke is even more obscure these days, because the canal extension is long gone. Trams have replaced the barges.

So now, if passengers are ever entertained by a tenor singing O Sole Mio under Dublin’s Rialto Bridge, he’s probably a drunk on the late-night Luas.

1 Irish tourists excluded from visiting Greece as country begins its tourism season
2 Remaking Ireland: Five positives from the pandemic
3 We need to pay very close attention to what is happening in Britain now
4 50 things to do in Ireland this summer
5 David McWilliams: Ignore the austerity ‘jihadis’. Here’s an alternative economic strategy
Real news has value SUBSCRIBE