Pat Leahy: Policing of online ads must be Government priority 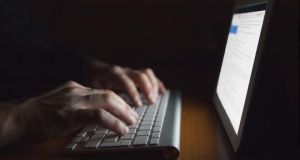 Online political ads: Who pays and where they get the money is information citizens need if they are to be fully informed about the democratic processes.

You may recall, during the recent referendum campaign, a sudden fear arose about halfway through the process that the result was going to be swung by huge spending on online advertisements and campaigning by one side.

Huge numbers of ads and paid-for content began appearing online, some of them peppered with dubious claims, with others purporting to be unbiased information when they were anything but.

Campaigners warned that the referendum was going to be bought by foreign money through the unregulated medium of online campaigning.

They had a point, too. Independent monitors of online activity such as the non-partisan Transparency Referendum Initiative identified a huge imbalance between the two sides in terms of online activity, with the No side much more active than the pro-Repeal side.

The issue got significant media attention – and not just because most journalists wanted the Yes side to win (some of them very passionately). If anonymous foreign forces can interfere in elections and referendums, there is clearly an issue for how our democracy works.

The online transparency activist Gavin Sheridan – one of the country’s leading experts in the area – warned the Yes campaign it was going to lose because it was being outmuscled, outspent and out-thought online by the No side. (Predictably, he was monstered by angry repealers on social media for his help.)

The matter was raised in the Dáil on several occasions – but the Government did a Pontius Pilate on it. Nothing could be done in the middle of a campaign. Now pass me that towel while I dry my hands.

The various bodies charged with monitoring referendums also shrugged: sorry, said the Referendum Commission, the Standards in Public Office Commission and the Broadcasting Authority of Ireland. Not our job.

Then the internet giants took things into their own hands. Concerned about the level of advertising spend they were seeing from outside the country – and worried, I expect, that they would be blamed if there was a No vote – Facebook announced it would no longer accept foreign-sourced ads. The following day, Google went further, banning referendum ads altogether.

The panic in repeal quarters abated; the threatened avalanche of anti-abortion ads targeted at undecided voters in the final days did not materialise. In fact, it was the repealers – by this stage with almost more money than they could spend – who flooded the online space in the final weeks. And in the end, the proposal was, of course, passed by a landslide margin.

Perhaps all the fuss about foreign money swaying our democracy was just the sort of exaggerated claim that happens in a campaign. Perhaps not. We will never know.

Perhaps all the fuss about foreign money swaying our democracy was just the sort of exaggerated claim that happens in a campaign. Perhaps not

But we do know some other things. One is that the power of online campaigning is not going to go away. A report published by the UK Electoral Commission last week found that 43 per cent of all the cash spent in the UK on political advertising in 2017 was spent on digital advertising. Next time it will be more. Digital is becoming the primary means of political communication during an election. And it is entirely unregulated.

The head of the UK election commission, Sir John Holmes, has asked the Government to promote a change in the law that would make political advertising more transparent and more honest.

Voters, Holmes said, urgently “need to know who is targeting them and how”. Digital ads should be forced by law to carry the name of the party or campaign behind them so voters know the source of any claims.

The recommendations are unsurprising. Transparency campaigners have been making them here for some time.

In a recent submission to the Government, the Transparent Referendum Initiative points out that regulating political ads isn’t a new idea. It’s just a new technology.

This is crucial to understand: what is needed is not some intrusive new monitoring of elections, it’s simply the extension of existing rules to the online space. Who pays for the ads, and where they get the money, is information that citizens need if they are to be fully informed about the democratic processes that they own and through which they are governed.

What is needed is not some intrusive new monitoring of elections, it’s extension of existing rules to the online space

Some of this was discussed at a Dáil committee during the week, where Fianna Fáil backbencher James Lawless’s Bill on online electioneering transparency reached its pre-legislative stage. Google’s representatives attended, lauding the objectives of the Bill but warning of its implications for free speech.

Legislators should be clear-eyed about this: it’s not Google’s job to regulate Irish elections, or to protect free speech, it’s theirs. Social media companies will have to be forced to do things they don’t want to do if the same transparency is to be imposed online as it is offline.

What is needed to tackle this is not just stronger laws, it’s a standing electoral commission charged with overseeing our democratic processes.

Democratic norms as we know them are under threat in many places in the western world. We need to protect them here. Officials are considering some sort of a voluntary code to be agreed with the internet companies before referendums and a possible presidential election in October. That’s not good enough. We need laws that the internet companies must abide by, and we need them to be policed by a strong watchdog with the power of independent action. It’s hard to think of anything that is more important for the current government and Oireachtas to do.