A week of number-crunching with Alan Turing, John King, and Sam McConkey

An Irishman’s Diary: Numb and numbers 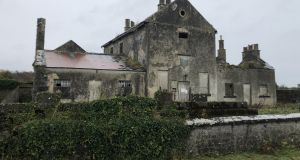 The day before the US election, I had to drive down to darkest Tipperary for a television shoot. After months of confinement in Dublin, enforced or voluntary, it felt furtive, even though I had no fewer than two letters of transit – one the standard issue for Irish Times journalists, the other from the TV company involved, the well-named Loosehorse Productions.   Once past the Garda checkpoint on the Naas Road, I felt like a loose horse myself, released into the wild.

We were doing a piece for Science Week, on codebreaker and computer pioneer Alan Turing, whose mother was a Stoney from Borrisokane. The Stoneys were an illustrious engineering family, giving Ireland a strong claim on Turing’s genius. And the idea was that we would record the piece in the old, now derelict Kyle Park Agricultural school – a Stoney monument in more ways than one – built by Turing’s grandfather in 1843.

It made for an atmospheric backdrop. It was also, as indoor venues go, surprisingly well suited to Covid safety protocols. Most of the windows were broken or absent and there was added ventilation from holes in the roof. On a day of atrocious weather, the wind howled in from every angle. By the end, instead of worrying whether I could remember my lines for the camera, I was worrying whether I could still move my lips.

The building is currently for sale, by the way. Agents Sherry Fitzgerald say this is “a unique opportunity” to buy “a magnificent stone-built period property”. They concede, however, that it “requires restoration”.  After three hours filming in it, so did I.

Had he been alive to watch the election coverage, even Alan Turing might have been impressed by the computational powers of another member of Ireland’s diaspora, CNN’s chief number cruncher, John King.

As revealed since, the latter is descended from two quintessential Connemara surnames – King via his grandfather, Christopher, who emigrated from Doonloughan to Boston in 1911, and Joyce via his grandmother. Also interesting, as Simon Carswell noted on Monday, is that the Doonloughan Kings recorded in the 1911 census included a “Festy”, who it now seems was the CNN man’s grandfather by another name.

The forename “Festy” is itself peculiar to Connemara. It’s short for the Latin Festus, which was often used for males christened in honour of the local saint, Feichin (whose name can be problematic in English).

Well-known examples include Festy Mortimer, a man who became a minor footnote in the history of philosophy.  When Ludwig Wittgenstein stayed in Connemara during the 1940s, Mortimer was his neighbour and was given the job of cleaning out the great philosopher’s cottage. This included destroying, at Wittgenstein’s request, “a very large pile of used manuscript papers”, a task that scholars of philosophy now regret he performed so well.

But there is at least one famous Festy in literature too, and he was a “Festy King” to boot. That was the name given by another Joyce – James – to the defendant in a mysterious court case described at length in Finnegans Wake. Like everything about that book, unfortunately, the events involved are hard to follow. Even with his magic wall, John King might struggle to make sense of them.

My other contribution to Science Week was to conduct a public interview on Sunday night last, from the comfort of my laptop, via the virtual community hall known as Crowdcast. This one wasn’t so much about the Stoneys as the Stony Greys; my interviewee was Prof Sam McConkey, from Clones, and it was part of the Cavan-Monaghan Science Festival. McConkey’s vastly impressive CV as an infectious disease specialist spans everything from the Aids epidemic of the late 1980s to Covid-19, via the Ebola virus and Sars. He foresaw earlier than most what was coming this year, having studied the numbers from China in January (“it was all there for anyone who looked and used Google Translate”).

He was soon warning of 100,000 deaths in Ireland if we did nothing and is still defending that prediction against critics – something he had to do again on Sunday as the audience questions piled in. He likens this to a driver swerving to avoid a tree and people claiming afterwards the tree was exaggerated.

But like many of us, McConkey has also driven tractors in his time. On a happier note, a former neighbour reminded him of summers when he used to “draw silage up by ours” on “a lovely Massey [Ferguson] 590”. And amid the talk of R-numbers, mutations, and mink, one questioner asked whether, based on experience, he preferred “Ferguson” or “David Brown”. He considered this a moment, gravely, and went with Ferguson.