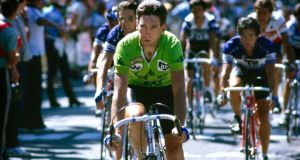 Sean Kelly. There was a time – the 1980s, mostly – when the name ‘Kelly’ and the word ‘Green’ were synonymous

We were discussing recently how in the 19th century, the name “Bridget” became a word in American English, meaning “housemaid”, because of the huge numbers of real-life Bridgets from Ireland who did that job then (Irishman’s Diary, October 2nd). But I have since been fascinated to learn that the modern Spanish equivalent of such workers also go by an Irish name, albeit accidentally. They call themselves “Las Kellys”, and now even have a union of that title.

They too tend to be immigrants, although not from Ireland. So where did the name arise? Well, as one language website explains, the “neologismo colloquial” is drawn from a three-word Spanish phrase that describes who they are and what they do – “Las que limpian”. It means “those who clean” (except that the pronoun is female in Spanish, which is apt, because so are the workers). To local ears, the “que” and the “li” equal “Kelly”.

And the Hibernian flavour doesn’t end there. Like all the best-organised movements these days, the union representing them in hotels and offices has a theme colour. Naturally, it’s Kelly Green, a particularly garish member of the Forty Shades, more likely to be seen in the US than here, although it was coined with the quintessential Irish surname in mind.

The Kellys’ green T-shirts have become as visible in parts of Spain as the yellow vests are in France. It was this that drew the attention of Frank MacGabhann, to whom I am again indebted. Last Wednesday evening, not for the first time, he saw their weekly protest on the Via Laetana in Barcelona. But this time he investigated further and, as someone with an interest in the history of the Bridgets, was “bowled over” by what he heard.

There is, as he says, “a very serious side to this”. The contracting out of cleaning services everywhere has made an already hard job much worse, to the detriment of “wages, hours, sick leave, and health”. But in banding together as “Las Kellys”, the Spanish cleaners have already gone a step farther than the Bridgets ever did. As Frank learned, they have even taken their cause to “Brussels”.

There was a time – the 1980s, mostly – when the name “Kelly” and the word “Green” were synonymous for another reason. The Kelly then was cyclist Sean and the Green was the jersey of points-classification leader in the Tour de France, a competition he dominated for years. No Irish cyclist had won it since, until 2020’s delayed instalment, when his protégé and fellow Carrick-on-Suir man Sam Bennett did so in style.

And there must be something in the air this autumn, because no sooner had I read about the green-shirted Kellys of Spain on Thursday than I watched another Irish cyclist (not a Kelly, but Stephen Roche’s nephew Dan Martin, which is close enough), wear the Green jersey to stage victory in the Vuelta a España.

But I’m told by those who know these things that green has become fashionable even in fashion circles, which was not always true.

Indeed, the other exciting thing I learned this week, when googling “Kelly Green”, is that there is now even an American model of that name.

Whether she has advanced the popularity of the colour is unclear, however. The thing she seems to be best known for is attempting to streak onto the pitch during the Super Bowl last February. It certainly increased the exposure of her personal brand name. But as far as I can judge from the pictures, none of her was the shade described.

Still on people abroad using Irish names, accidentally or otherwise, I noticed that Friday was the 25th birthday of another US model and actress, the unusually christened Ireland Baldwin.

Even for a daughter of Hollywood royalty on both sides – her parents are Alec Baldwin and Kim Basinger – that’s eccentric enough to encourage the suspicion that her moment of conception must have occurred during a romantic holiday in these parts.

And yet the nearest her father has got to elaborating was via Twitter some years ago when he quipped that she was named Ireland because “she’s beautiful but can’t manage her finances”.

It was a funny if harsh joke at the time (2012). But of course her name dates back to October 1995, a year when Ruairi Quinn delivered his first budget for the Rainbow Coalition. That was still an era of fiscal prudence, long before Celtic Tiger Ireland lost the run of itself. So joking aside, it seems the birthday girl owes her unusual name to more a prosaic source, DNA. Baldwin has elsewhere described his background as “mostly Irish”.