European army would be no way to honour Armistice 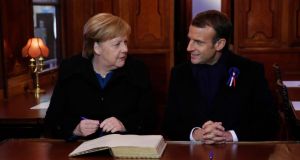 Angela Merkel and Emmanuel Macron in a replica of the wagon where the Armistice was signed in 1918, in the Clairiere of Rethondes forest, during a commemoration ceremony for Armistice Day. Photograph: Philippe Wojazer/EPA

It was moving to see German chancellor Angela Merkel and French president Emmanuel Macron at the centenary celebrations of the 1918 Armistice. Last Saturday, the two leaders sat side by side in a replica of the railway carriage, known as the Compiègne Wagon, where France’s field marshal Ferdinand Fochs and German minister Matthias Ezberger sat facing each other nearly 100 years ago.

Fochs refused to shake hands with his German counterpart after the signing of the armistice. In contrast, Merkel and Macron were pictured holding hands.

Merkel and Macron’s subsequent calls for a “real European army” were not quite so moving. This is not the first time either of them has called for such an entity but the timing was strange, to put it mildly.

The Great War, as it was called, ushered in an era of rapidly expanding military technology, involving innovations in everything from flamethrowers and tanks to poison gas. The first World War ended empires and the lives of nearly 20 million soldiers and civilians and left a legacy that eventually led to another worldwide conflagration.

For combatants, it also left a legacy of what was euphemistically called shell shock, a pattern of distress, sleeplessness and intrusive memories that was initially seen as a psychological reaction, as were its later manifestations, combat fatigue and post-traumatic stress disorder.

A disturbing small study published in the Lancet two years ago of postmortems on the brains of those who had been diagnosed with PTSD posited that combatants were instead suffering from the devastating effects of being in the proximity of explosions.

They had suffered a distinctive pattern of brain injuries consistent with blast injuries. Rather than being a psychological response to extreme stress and trauma, these combatants were brain-damaged.

Dreadful as that is, author Bryan Doerries in his book The Theatre of War, suggests soldiers undergo a deeper injury, something he describes as “something far more insidious, destructive and complex than the neurological symptoms . . . [something] a growing number of prominent mental health professionals now call ‘moral injury’”.

In short, killing and maiming, even when sanctioned by society, inflicts literal and moral wounds, which sometimes never heal. We seldom think of the impact on those we ask to do our killing for us.

Germany and the Netherlands have suspended arms sales to Saudi Arabia, but to date, Macron has refused to do the same

In the 100 years since the Armistice, have we advanced that much? War is still a daily reality. Take Yemen, pushed to the brink of a massive humanitarian disaster by a three-year civil war. Houthi rebels deposed the government and since then, a Saudi-backed coalition has pounded the country, resulting in massive civilian casualties.

The Iran-backed Houthi rebels have also engaged in indiscriminate shelling, kidnappings and persecution, including of the Baha’i minority.

But there is something repulsive about the European Union wringing its hands about the potential death by starvation of millions of Yemeni civilians, while much of the weaponry used by the Saudi-backed coalition has been sold to them by the United States, the UK and France.

A European Parliament resolution passed last Wednesday declared that despite commonly agreed EU rules on arms export control, there is a systematic failure to enforce them.

The resolution noted that most arms exports to Saudi Arabia from EU member states violated six out of eight agreed criteria, which are supposed to prevent weapons being sold to countries which use them to violate human rights.

For example, “exported warships helped to reinforce a naval blockade on Yemen, while aircraft and bombs were fundamental to the air campaign”.

Germany and the Netherlands have suspended arms sales to Saudi Arabia, but to date, Macron has refused to do the same. The French ministry of defence reported that the value of arms exports dropped in 2017 to €6.9 billion from €14 billion the previous year and a record €17 billion in 2015.

The sums involved in the armaments industry are staggering and cast a strange light on Macron’s pet project, the Paris Peace Forum, launched in the immediate aftermath of the Armistice centenary celebrations.

This peace forum is being held after the EU has approved funding for research for fully autonomous weapons controlled by artificial intelligence, including drones and so-called killer robots. The EU is the third-biggest exporter worldwide of armaments. Holding a peace forum while enthusiastically promoting a European army also seems hypocritical.

And speaking of hypocrites, in 2017 Ireland signed up for Pesco, the EU’s treaty-based framework and process to deepen defence co-operation among EU member states. The aim is to jointly develop defence capabilities and make them available for EU military operations.

Denmark, another neutral country, used its permanent right to opt out. Malta opted to wait and see if it would compromise its neutrality.

We can tell ourselves that we will opt in to only initiatives that do not compromise our neutrality, but if we really meant that we would have chosen Malta’s stance. It is sad that we did not do so because positive neutrality is a much-needed counterweight to the false idea that proliferation of armies and weapons can ever bring us closer to peace.

1 Gardaí disperse crowds gathered at coastal beauty spots
2 Normal People Class of 2020: The nine college friends in the series
3 Coronavirus: Further two deaths in Republic as expert warns against ‘rush’ to ease restrictions
4 Cork residents protest over students partying near UCC
5 Simple restorative exercises that can improve your posture after all the sitting
Real news has value SUBSCRIBE