The Irish Times view on the armistice centenary: four years that remade the world

Attention is best concentrated on making effectual the unrealised wish of the interwar period: “Never again” 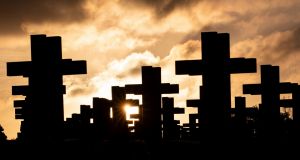 The sun sets over the tombs of the French soldiers who fell during the first World War at the National Necropolis of Notre-Dame de Lorette in Ablain-Saint-Nazaire, France. Around 45,000 soldiers are buried there, half of them in individual tombs. Photograph: Ludovic Marin/EPA

The armistice signed at Compiègne near Paris 100 years ago tomorrow marked for most combatants an end to the four-year “Great War”, a conflict which had claimed the lives of up to 19 million military personnel and civilians. The silencing of the guns, on the 11th hour of the 11th day of the 11th month, left all the European warring parties, victors and vanquished, exhausted, their economic and human resources bled dry. For many of the survivors, the abundant optimism about the power of reason and the possibility of peaceful democratic progress characteristic of the pre-war years was now shattered.

It is understandable that each country has tended retrospectively to see the war in a partial way, in the light of its own experience of it and the relationship of that experience to “the national story” as a whole. Thus in Ireland we are chiefly aware of two theatres of conflict, the Western Front and Gallipoli, while much of the ink that has flowed on the subject of the war has been consumed by controversy over the idea of remembrance, in particular whether combatants who fought with the British army should be accorded an equal place in our national affections with those who fought for Irish independence.

But in fact the war was fought over many fronts and involved many nations and empires, some of whom suffered losses that were proportionally even greater than those of the United Kingdom, France or Germany. In northeastern Italy at least a million soldiers died in a war fought in the mountains in extreme cold in trenches hacked out of the ice.

On the Eastern Front, Austria-Hungary lost three-quarters of a million men and Russia two and a quarter million. In France, a shocking four per cent of the population died, but in Romania 8 per cent, in the Ottoman empire 13 per cent and in Serbia 17 per cent. The political consequences of the war were also more devastating in the east. In Russia the Tsarist regime, and subsequently liberal democracy, were overthrown.

The multinational Austro-Hungarian empire, which some see as prefiguring the European Union, collapsed into its component parts, throwing up new nations which often proved unreceptive to democracy.

It is human – and appropriate – to feel for the victims of war, but “remembrance” can tread a fine line between pity and glorification. The grandiose war memorials erected in fascist Italy in the 1930s were meant not to instil sympathy but national pride. Perhaps what we should take away from this centenary is not a partial historical narrative, or one that dubiously glorifies “gallantry” or the “sacrifice” of “the fallen”. It might be better to concentrate on making effectual the widely shared but sadly unrealised wish of the interwar period: “Never again”.