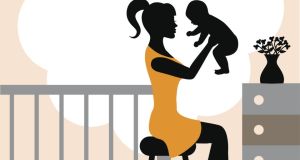 Parenting anxiety has never been higher and the irony is some anxiety can be traced to the social media that for many is a lifeline.

To no one’s surprise, new mothers are exhausted, overwhelmed and lonely. And they don’t feel supported by the State in their role as mothers.

Those are some of the findings of a recent survey by the parenting website, Everymum. This website announces that as “Ireland’s largest and best-loved parenting community with over 300,000 registered members, Everymum is committed to facilitating relevant cross-platform communication which adds value and connects mums with useful brand messages.”

By tactics such as producing gift bags for new mothers, Everymum exposes parents to specific brands at a time when they are likely to establish brand loyalty. The site has interesting statistics on mothers: 98 per cent of them manage all the bills and budgeting in families, including which family car to purchase.

Nearly three-quarters of them find social media useful for parenting and 58 per cent of them have bought a product recommended by a friend on social media. In other words, mothers are a ripe target for marketing.

Parenting anxiety has never been higher and the irony is that some of that anxiety can be traced back to the social media that for many people are a lifeline, replacing the kind of local community their mothers or grandmothers took for granted.

Parenting today is far different to the kind of parenting anyone over 30 had because the smartphone has changed everything.

A generation ago, parenting used to be something that you absorbed, for better or for worse, from your own mother. There were always external sources of advice, like parenting books with their wildly conflicting stances.

Parenting used to be something that you absorbed, for better or for worse, from your own mother

Some advocated letting babies cry it out: others implied that putting baby down for five minutes would damage her or him for life.

But social media have taken this to an entirely new level. People do not trust their instincts or even know where to find them.

New mothers today come from smaller families so that the first baby they may have ever held may be their own.

They are bombarded with advice and the standards are savagely high for middle-class mums. No screen time for under-threes. Make all your own baby food. One popular book advocates 15 minutes of focused play with your baby or child every day, where baby takes the lead.

For stressed mothers, finding 15 minutes to wash and dress themselves can seem like a challenge.

Meanwhile, they are presented with role models like newly pregnant Meghan Markle, who besides being beautiful, can bend that perfect body into pretzel shapes because she has been doing yoga since she was a child.

She bakes cakes while on royal tours, producing banana bread to bring to a gathering. (Of course it was gluten-free – did you have to ask?)

She produced a mini-internet frenzy recently by the unprecedented action (for a royal) of closing her own car door.

She seems like a friendly, kind person even if she did enter the royal reality show with her eyes wide open.

But what has she in common with most mother’s lives?

Total strangers take it upon themselves to encourage you not to leave it too long, as if becoming pregnant was something completely under your control.

The minute you go beyond 2.1 children the same self-appointed pregnancy police begin a chorus of disapproval. Mothers I know who were pregnant for the sixth time dreaded leaving the house because they were sick of being judged as feckless and perhaps a little dim.

And if you are a young mother? Our society has switched seamlessly from stigmatising having sex and becoming pregnant outside marriage to having no problem with sex outside marriage unless it produces an unplanned child.

The stigma now attaches itself to continuing with a pregnancy. And the weight of disapproval is just as heavy, just as judgmental and just as harsh as ever it was in 1950s Ireland.

In addition, women who choose to stay at home are told bluntly that it is a waste of their qualifications. Similarly, women who work outside the home are riddled with guilt because their days are filled with stress and they worry endlessly if their children are short-changed.

Men are stepping up more to become actively involved dads but the State’s policies in housing and childcare reinforce the model of two parents working full-time in the paid workforce.

Yet childcare still costs a fortune and is sometimes of indifferent quality. Homes of their own remain elusive for many young families.

In spite of the lack of State support, women report that they wish they could have one more child and the reason they do not is because they cannot afford it.

There is something about being a mother, despite the stress, insecurity, financial strain and being targeted by marketers every time you click on a link, that is uniquely rewarding. Little hands slipped into yours: huge eyes filled with trust. These are irreplaceable experiences.

But in a more humane society, it should not have to be so overwhelming, exhausting and lonely.