Romero’s example should encourage Catholics to cherish all life 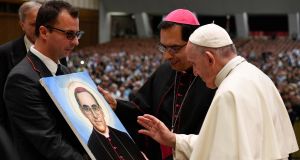 In an era when fake news is everywhere and three journalists have been murdered in the EU within the past year, it is worth pondering that the recently canonised Archbishop Oscar Romero of El Salvador was murdered in part for his work as a citizen journalist.

Oscar Romero loved radio as a medium. In Maria Lopez Vigil’s book Oscar Romero: Monsenor Romero –Memories in Mosaic, a collection of personal memories of the archbishop from dozens of people who knew him, the impact of Romero’s broadcasts on the Catholic radio station is clear, providing a rallying point for resistance to evil.

Ireland played its own small role in that radio station, when Trócaire gave a donation towards a new transmitter. But Romero was not just an enthusiastic amateur.

He became the only trustworthy voice in El Salvador, the only one telling the truth about the murderous regime that was imprisoning, torturing, killing, raping and causing thousands of its own citizens to disappear. The government attacked and bombed this radio station because it was the voice of truth.

The mainstream media was either in bed with the government or fearful and therefore self-censoring. Instead, people tuned in to Romero’s Sunday homilies, often an hour long, to hear him declare that these outrages flew in the face of God.

There is an account in the book about a group of friendly lawyers whom Romero once called in for advice. The supreme court had condemned Romero in an open letter for his allegation that judges were corrupt and called on him to produce evidence or retract.

Romero humbly thanked the lawyers who had advised him to say no more and hope the storm would blow over. They tuned in to his Sunday homily broadcast and heard him begin to list all the breaches of justice: torture, disappearances, violations of the constitutional right to life, to habeas corpus, the right to strike and the right to organise. The lawyers were aghast.

He ended with a rallying cry: “The gospel requires me to do so. And if, for doing this, they take me to court or send me to jail, I’m ready for that, too – even if that only amounts to one more injustice among so many others.’

But to the lawyers’ amazement, it was the supreme court, not the archbishop, who took their advice. It simply ignored the homily.

Perhaps the supreme court knew that Romero would eventually be silenced. A bullet to his heart ended his life as he celebrated Mass. But his message has never been silenced.

He did not begin as a turbulent priest. In fact, some people believed he suffered from anxiety, in particular from scrupulosity, which is a form of ruminative obsessive compulsive disorder, where the afflicted person feels forced to endlessly think in an unhealthy way about faults and failings.

What changed him from a cautious, anxious individual to someone with the courage to stand up to a brutal government whose security forces coined the phrase, “Be a patriot. Kill a priest”? Again, Maria Lopez Vigil’s book provides an invaluable insight, this time from Fr César Jerez, the Jesuit provincial in Central America.

Archbishop Romero had been persuaded by others that there should be just one single Mass in the archdiocese of San Salvador to mark the funeral of his friend, Fr Rutilio Grande, who was killed by security forces.

No other church celebrated Mass, so the enormous attendance at the cathedral was designed to highlight the enormity of murdering a priest and to show that Romero’s people and priests were under his protection.

When he next went to Rome, he was upbraided by Vatican officials for ignoring the papal nuncio’s direct command to avoid such gestures.

However, Paul VI, also appropriately canonised last weekend, told him to have courage and to keep going. Both men had a lot in common. Diffident, anxious but able to find the courage to defy conventional wisdom and do the right thing when it was needed.

On the Rome trip Fr Jerez accompanied Romero and one evening asked the question he had been burning to ask: what changed you?

Romero told him that he had been raised as a poor person, that he had known hunger, but that after he went to the seminary he had begun to live in a more privileged world. As secretary to the bishops’ conference, he had been buried in paperwork. But when he went to San Salvador, he saw extreme poverty again. Then came the savage murder of his Jesuit friend, Fr Rutilio Grande.

Romero said to Fr Jerez that he felt like a piece of charcoal that once lit is not too hard to get lighting again. He concluded: I changed, but I also came home again.

Perhaps the best honour that could be paid to Romero would be for more Catholics to change and come home again to their radical roots in the gospel, learning to care for the poor and dispossessed, and promoting justice and non-violence from conception right through the human lifespan, whatever the cost.