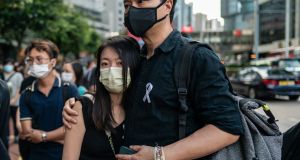 Mourners embrace during the one-year anniversary memorial vigil to commemorate Marco Ling-kit Leung at a shopping mall on June 15, 2020 in Hong Kong, China. Thousands of mourners gather to mark the one-year anniversary of the death of Leung, who fell to his death during a rally against a controversial extradition bill proposal last year. (Photo by Anthony Kwan/Getty Images)

While the major international powers were being distracted by the Covid 19 crisis, it was inevitable that China would see it as an ideal opportunity not only to undermine the democratic protest movement in Hong Kong and impose its authority over the former British colony but also to pursue a more aggressive role in Asia particularly in the South China Sea.

During the current pandemic crisis, China has clashed with Vietnam, Malaysia, India and Taiwan. In the case of Taiwan, its omission of the word “peaceful” in its traditional annual statement about its desire for reunification with that country is cause for particular alarm.

Under the Basic Law the Hong Kong Government (HKSAR) has an obligation to introduce legislation under Article 23 “to prohibit any act of treason, secession, sedition and subversion” against the Chinese government. In discharge of this obligation, the Hong Kong Government in 2003 introduced an anti-subversion bill. However, this was regarded as a step too far by its critics who saw it as an attempt to suppress political freedoms and human rights and make Hong Kong more like mainland China. Over 500,000 people demonstrated its opposition. Following the strength of the opposition voices, the bill was eventually withdrawn with the acquiescence of President Xi Jinping’s political predecessors.

Similar fears were aroused about threats to Hong Kong’s basic freedoms and human rights when the current Hong Kong government led by Carrie Lam, obviously under pressure from Beijing, introduced proposals for new extradition laws between Hong Kong and mainland China in 2019. On this occasion over a million Hong Kong citizens marched in protest and the bill was shelved.

Burnt by these experiences and with the international community in disarray, Chinese President Xi Jinping decided on a new tougher approach to bring Hong Kong under Beijing’s direct control. China announced that it was bypassing Hong Kong’s legislature and would impose national security laws which would target “subversion, secession, terrorism and foreign interference”.

Critics of this initiative from both inside and outside Hong Kong interpreted China’s actions rather differently - they saw it as another attempt not only to suppress free speech, protest and political dissent but also to unilaterally destroy Hong Kong’s autonomy under the “one country. two systems model which violated the 1984 Sino-British Joint Declaration.

The United States, the UK, Australia and Canada issued a joint statement on May 28th condemning China’s action. The EU declined to join them and on May 29th, EU Foreign Ministers issued its own statement simply expressing grave concern on the matter. This was an act of political cowardice which is alleged to be because of pressure from German Chancellor, Angela Merkel who is herself being pressurised by German car manufacturers who want to increase their sales in the China market.

Both the UK and the US have followed up on their joint statement by proposing important and decisive actions.

President Trump announced sanctions that he would impose including the revoking of Hong Kong’s preferential treatment as a separate customs and travel territory from the rest of China.

Boris Johnson in a bold and decisive move which angered China announced that if China does not withdraw its proposed security laws, he will take steps to put three million Hong Kong citizens on the path to fully fledged British citizenship.

Contrastingly, EU Foreign Affairs Commissioner Joseph Borrell has indicated that the EU has no plans to impose sanctions on China or Hong Kong.

The EU has indicated that it prefers to continue its engagement with China and is planning a proposed EU-China summit in Leipzig in Germany in September during the German Presidency of the EU which will start on July 1st.

The EU has a proud record of promoting its founding values of respect for human rights, democracy and the rule of law. It would be an abandonment of our principles if we were to allow selfish economic self-interest to take precedence over these in our dealings with China.

It is difficult to absorb the fact that Trump and Johnson are showing more leadership than Angela Merkel. It would be extremely sad and disappointing, as she approaches the end of her political career, if her much widely and deserved respected political legacy would be tainted by her failure to do what is right by Hong Kong.

Given the gravity of the threat posed to the rights and freedoms of Hong Kong citizens, it is imperative that the EU acts now to dissuade China from its current course of action. By September it may well be too late to do anything.

This week’s plenary session of the European Parliament will debate Hong Kong. MEP’s should pressurise the EU Commission and Council into postponing the Leipzig summit if China persists in imposing national security laws in Hong Kong. However, more is required. Despite the current economic threats that we are facing arising from the current pandemic crisis, the EU still remains the most powerful trading bloc in the world. We should use that considerable economic power and join with the US, the UK, Canada and Australia in warning China that we will impose political and economic sanctions on them.

If we fail to prevent China destroying Hong Kong’s autonomy, its next target will be Taiwan and Chinese interference in that country will have even more horrific consequences for global peace and security.