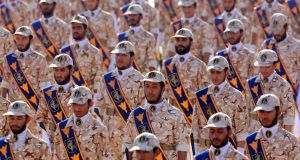 Donald Trump’s decision to designate Iran’s Revolutionary Guard as a terrorist organisation may be unprecedented, but it is hardly surprising. The United States already views Iran as a “state sponsor of terror” and has previously imposed sanctions on the guard. But, in keeping with Trump’s foreign policy, it’s not at all clear what end is served by making such a hostile move now.

The Revolutionary Guard was established after the Islamic Revolution as an elite corps loyal to the new regime. It grew in size and influence, and today it is said to be deeply enmeshed in many aspects of the Iranian economy. Its external operations arm, the Quds Force, works with proxy groups in Iraq, Lebanon and Syria and is blamed by the US for destabilising the region.

This is a blunt ideologically-driven gambit by an administration in which Iran hawks are in the ascendant. It is also hypocritical

The terrorist designation is largely a symbolic strike against a force widely seen as essential to the survival of the Mullahs. But it could damage long-term US interests and will certainly hinder European efforts to draw Iran into the global political-economic system. As the enforcer of a strict morality code, the Guard is loathed by many Iranians. But the prediction of president Hassan Rouhani that the US action would prompt many of his compatriots to rally round the force could be borne out. Moreover, the blanket blacklisting of the Guard ignores the complexity of the organisation, which has innumerable ties to legitimate business and is made up of conscripts who have no choice but to serve. Is everyone connected to the Guard going to be branded a terrorist?

But thinking of Washington’s move as a considered tactical advance is wrong-headed. This is a blunt ideologically-driven gambit by an administration in which Iran hawks such as John Bolton and Mike Pompeo are in the ascendant. It is also hypocritical. No similar measures will be taken against the interventionist military forces in Pakistan, Saudi Arabia or any other US allies.

One of the few things it will achieve, sadly, is to make it more difficult for reformists in Tehran to make the case for sticking with the nuclear deal that the European Union still hopes to salvage.

1 Who are Ireland’s 17 billionaires?
2 Election 2020: FF edges ahead of FG as SF surges in new Ipsos MRBI poll
3 Gardaí suspect botched murder attempt was bid to avenge Mulready-Woods death
4 Rob Delaney: ‘As my career took off, my son got sick ... And then he died’
5 Fintan O'Toole: Safety-first politics has had its day
Real news has value SUBSCRIBE