The Irish Times view on the Israeli elections: A dangerous move

Whatever the outcome of today’s election, the two-state solution appears to be off the agenda for now. Even serious negotiations are a long way off 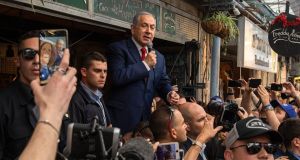 With voting under way in the 2015 Israeli general election, and with opinion polls suggesting a close race between his Likud party and a centre-left alliance formed to oust him from power, Binyamin Netanyahu made a now infamous intervention. Israeli Arabs were flocking “in droves” to the polling stations, he announced in a characteristically unsubtle attempt to mobilise his right-wing base. Now, on the eve of another election, Netanyahu has reverted to the same tactic. In an interview at the weekend, the prime minister said that, if given a fourth term, he would start to “apply [Israeli] sovereignty” over the West Bank. He also explicitly ruled out a Palestinian state, saying it would “endanger our existence”.

Annexation of the West Bank has long been a demand of the settler movement. As the centre ground of Israeli politics has shifted to the right and settlers have become more influential, the idea has drifted from the fringe to the mainstream. It would be a clear breach of international law and would formally kill off the possibility of a two-state solution.

With polls showing Likud neck-and-neck with the Blue and White party, a centrist grouping, Netanyahu’s move is an attempt to draw back to his party some of the right-wing voters tempted by smaller religious-nationalist outfits. But it is not only that. Annexation of the West Bank is the logical conclusion of Netanyahu’s policy over the past decade - one that has consisted of rapid expansion in illegal settlements and the steady erosion of conditions that could lead one day to a Palestinian state. With the United States under Donald Trump no longer applying a brake on his excesses, he has more freedom to manoeuvre than at any stage in his premiership.

Whatever the outcome of Tuesday’s election, the two-state solution appears to be off the agenda for now. Even serious negotiations are a long way off. But, as Netanyahu’s dangerous late gambit shows, the result could nonetheless profoundly affect the situation of Palestinians and the long-term prospects for peace.

3 Maternity leave during lockdown has its advantages