The Irish Times view on Turkey’s elections: A setback for Erdogan 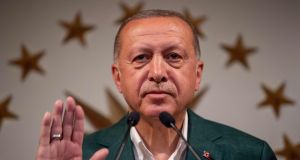 Long before he became a populist strongman with pretensions to regional leadership, Recep Tayyip Erdogan was the classic local fixer-politician. The future Turkish president made his name as mayor of Istanbul in the 1990s. Before he arrived on the scene, Turkey’s largest city was in the economic doldrums. Rapid growth had created chronic infrastructural problems, including water shortages, patchy rubbish collection and traffic chaos. As mayor from 1994 to 1998, Erdogan oversaw a transformation in the city’s fortunes. Today, ask his supporters in Kasimpasa, the Istanbul district where Erdogan was born and raised, to explain his success, and they will point to the urban regeneration of the 1990s – the water supply improved, civic amenities were built, and rubbish stopped piling up on the streets. Within a few years, Istanbul’s economy took off.

That makes the preliminary results of Turkey’s local elections deeply ironic. Not only is economic mismanagement at the root of one of the biggest reversals Erdogan has suffered since he took national office 16 years ago. But he may well be about to lose control of Istanbul as a result.

In what is likely to be the last electoral test for Erdogan before national polls in 2023, his Justice and Development (AK) party lost control of the capital, Ankara, for the first time since the party was founded in 2001, and is on course – pending a recount – to lose the biggest prize of all, Istanbul. That would leave the opposition in control of five out of six of Turkey’s biggest cities, depriving the AK party of the networks of patronage that have underpinned its success.

Having taken credit for the boom of the 2000s, Erdogan and his party are now taking the blame for recession and poor management of the public finances. Inflation is at 20 per cent, the unemployment rate is 13.5 per cent and the wave of credit that fuelled the economy for the past decade has dried up. Perhaps sensing that a setback was on the cards, Erdogan had spent the weeks leading up to polling day working to mobilise his religious base. He falsely accused the West of having a role in the recent mosque attack in New Zealand and of working to sabotage the Turkish economy. He said the opposition were taking orders from terrorists.

The election results are no doubt a setback to Erdogan, denting his reputation for electoral invincibility and leaving him more vulnerable than at any time since becoming president. It will also provide a vital fillip to the beleaguered opposition after a bruising three-year campaign of purges and consolidation of power by Erdogan. But it would be a mistake to underestimate him. He remains the most popular politician in Turkey, and a combination of that popularity, his vast powers and his authoritarian instincts will make him exceptionally difficult to beat in four years’ time.