The Irish Times view on the local property tax: a cowardly deferral 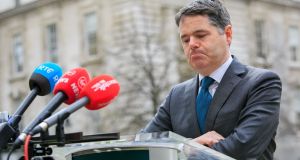 “People will now know where they stand until 2021,” said Minister for Finance Paschal Donohoe. The subtext of his remark was that they will not have to pay anything extra until all of the electoral contests are out of the way. Photograph: Gareth Chaney/ Collins

The Government’s decision to defer an increase in local property tax (LPT) for a further year is a cowardly move clearly motivated by the upcoming local and European elections and the prospect of a general election some time in the year ahead. “People will now know where they stand until 2021,” said Minister for Finance Paschal Donohoe. The subtext was that they will not have to pay anything extra until all of the electoral contests are out of the way.

What makes the decision all the more deplorable is that the Department of Finance commissioned a review group to look at the operation of LPT and report on how it should be reformed. The Cabinet discussed the report on Tuesday and decided to defer the scheduled revaluation process from November 1st this year until the same date in 2020. Back in 2015 the rate of LPT paid by homeowners was frozen until November 1st this year. The deferral for another year means that despite the rapid increase in house prices since the tax was introduced in 2013 people will continue to pay the same amount as they paid in year one.

The review group expressed concern at the continuing reliance on out-of-date house valuations and pointed out the anomaly in the fact that houses built since the recession have been exempt from LPT despite having increased significantly in value since they were purchased. There is a clear danger that if it is not updated in the near future the entire system could be struck down in a court action for the same reasons as rates on agricultural land were back in the 1980s.

All of the political parties share some of the responsibility for the failure to devise and implement a fair and coherent system of property tax. It has been a political football ever since Fianna Fáil won the 1977 election on the pledge to abolish rates on domestic dwellings.

From Fine Gael right across the political spectrum to Sinn Féin and the hard left, our politicians have failed to learn one of the key lessons of the financial crisis, which was the requirement to widen the tax base to put the State’s finances on a sustainable path.

1 Ireland has fifth-largest number of billionaires per capita in the world, says Oxfam
2 Clontarf tenant says her garden was ‘destroyed’ without warning by Irish Rail
3 Dr Eva’s Great Escape is everything Dermot Bannon’s recent show was not
4 Fianna Fáil election candidate was disqualified from being company director
5 RTÉ receives complaint from union after ‘issue’ with spokeswoman’s accent
Real news has value SUBSCRIBE