The Irish Times view on the Trump impeachment: morality and politics 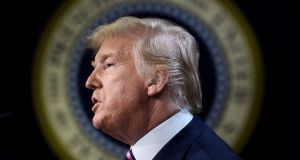 In a vote split largely along party lines, the US House of Representatives on Wednesday approved two articles of impeachment – abuse of power and obstructing a congressional inquiry. Photograph: Brendan Smialowski/ AFP via Getty Images

In one respect, Donald Trump is right when he calls his impeachment a farce. He is about to go on trial in a court – the US Senate – where the jury is packed with his most ardent supporters and the jury foreman, Mitch McConnell, has openly admitted that he is co-ordinating with the accused on courtroom tactics. The outcome is already virtually certain. Given that not a single Republican senator has yet broken ranks and indicated an intention to vote for the president to be convicted, Trump will almost certainly not be removed from office at the conclusion of that trial.

Yet Trump’s impeachment is a significant moment. In a vote split largely along party lines, the House on Wednesday approved two articles of impeachment – abuse of power and obstructing a congressional inquiry. Trump has become the third US president to suffer that fate, and it will remain as an indelible red mark on his page in the history books.

Morally, the Democrats were left with little choice. Trump’s behaviour in pressing Ukraine to dig up dirt on former vice-president Joe Biden was clearly an attempt to get a foreign power to interfere in a US election and as such quite comfortably met the bar for an abuse-of-power charge. History would not have been kind to the Democrats for turning a blind eye to such abuse.

The political implications are more ambiguous. Trump will be the first impeached president to face re-election, and Republicans believe the process could work to their electoral advantage. It certainly feeds Trump’s persecution complex. But polls show that public opinion on impeachment is evenly divided and has hardly budged in months. House speaker Nancy Pelosi has handled the process deftly so far. Now she should seek to have the process concluded as soon as possible.

That would create space for the Democratic primary – and the party’s eventual nominee for the 2020 presidential election – to take centre stage. The Democrats were right to impeach. But the decision on whether Trump continues in office will be for the voters to decide in November.