The Irish Times view on Boris Johnson’s pandemic: Behind the curve 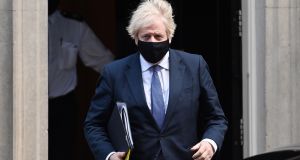 Boris Johnson’s hasty introduction of the lockdown this week followed a pattern that has seen him delay difficult decisions until they become unavoidable. Photograph: Andy Rain/ EPA

With more than a million people in England infected with coronavirus and hospital admissions 40 per cent higher than during last year’s peak, Boris Johnson’s latest national lockdown met little resistance in the House of Commons yesterday. European governments that once appeared to have the virus under control have struggled to deal with the latest wave and the experience in this State shows how quickly policy changes can translate into a surge in infections. But as Labour leader Keir Starmer pointed out, the British government has been consistently behind the curve in tackling the pandemic, leaving the country with the highest death toll and the worst economic damage of any major European state.

Johnson’s hasty introduction of the lockdown this week followed a pattern that has seen him delay difficult decisions until they become unavoidable. Torn between public health advice to tighten restrictions and pressure from his libertarian backbenchers to loosen them, his procrastination has made each lockdown more painful than necessary. Allowing schools to reopen on Monday only to close them on Tuesday, Johnson left teachers, parents and students scrambling to prepare for at least six weeks of remote learning. And his refusal to bow to the inevitable sooner robbed businesses of valuable time to adjust and limit the cost of locking down.

The full story of the pandemic has not been written, however, and Britain has left its neighbours behind in rolling out vaccinations. More people have received the first vaccine dose in Britain than in all 27 EU member-states combined and the National Health Service hopes to reach more than 13 million people by mid-February. With 1,000 vaccination centres due to be operating by the end of this week and seven sites opening in stadiums and convention centres next week, the target is ambitious but not unrealistic. A successful vaccination campaign could save many thousands of lives, allow the economy to reopen earlier than its neighbours and give Johnson a better story to tell about his handling of the pandemic.