The Irish Times view on the world in 2020: when nature put us in our place

Covid-19 did not remake the global landscape so much as reveal what was already there – the contradictions, tensions and inequalities 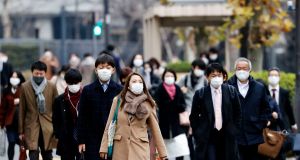 It was an annus horribilis, the year of the pandemic, but a year when, biblically it seemed, nature, unconstrainable, unleashed its rage against us, reminding us of our place.

Huge wildfires burned up the coast of Australia and would torch millions of acres of California. In South America a quarter of the world’s largest wetland was lost. Climate change continued its slow suffocation of the planet – the warmest year on record, 2020’s first nine months saw record concentrations of major greenhouse gases. The Arctic sea ice retreated to record lows.

In January, the Philippines’ Taal volcano erupted, raining sulphurous ash across the mainland and forcing 300,000 from their homes. Kenya was invaded by hundreds of millions of locusts, the worst outbreak in 70 years.

And on December 31st, eve of the new year, China reported a cluster of cases of pneumonia in Wuhan, Hubei Province. By January 30th the World Health Organisation declared a “public health emergency of international concern”. Infections and deaths would rise globally to 81 million and 1.7 million-plus, respectively, by late December.

Yet these natural calamities were for the most part rarely simply “natural”, random acts of God. Human agency played a key part through commission or omission in the causation and amplification of damage: the weather “events” caused by man-made atmospheric warming, the careless storage of explosives in Beirut that “self-combusted” killing 300 in August, and in the reckless disregard and mismanagement of the Covid-19 crisis.

The latter shaped the world’s political dynamic. It did not remake the global landscape so much as reveal what was already there – the contradictions, tensions, inequalities. It was a year when the billionaires got richer and the food banks were stretched beyond capacity, unemployment and poverty soared, children went hungry, and gender and racial differences were exacerbated.

Nowhere more so than in the US where the denialism and contempt for science of Donald Trump, insisting the virus was about to “disappear”, that it would “go away” when the weather got warmer, that it was “fading”, was the backdrop to a year that started with impeachment – though rejected by the Senate – and rolled into a presidential campaign that many feared was set to give him a second term.

But his recklessness was too much for all but diehard supporters, the few who would go on insisting into the year-end, without evidence, that the election had been stolen. It would be July before Trump publicly wore a mask for the first time. And a Stanford University study would link more than 30,000 Covid-19 cases and 700 deaths directly to his campaign rallies.

The fruit of this strange year in the US were the eclipse of Trumpist populism – and to a lesser extent abroad, where the manifest incompetence of fellow autocrats such as Brazil’s Jair Bolsonaro and Russia’s Vladimir Putin were exposed –culminating in the election of Joe Biden with a first black woman vice president, Kamala Harris. Most importantly, we now see the prospect of reviving the campaigns both against coronavirus in America and climate change through US recommitment to the Paris accord. The remarkable spread of Black Lives Matter across the world was an important landmark in the globalisation of civic protest.

Closer to home, the UK Brexited the EU on January 31st, and the 11th hour conclusion of a trade deal in the dying days of the year closed an important chapter. And brought huge relief all round. Yet, even with a deal, 2021 is likely to be the year of the tailback, as, conveniently for the Brexiteers, the economic fallouts from Covid-19 and Brexit merge, blurring responsibilities for the mess.

Boris Johnson, no less than Trump, has had a poor pandemic, his bluster and organisational incompetence failing to inspire the public’s confidence like Germany’s Angela Merkel or Scotland’s Nicola Sturgeon. The Brexit deal will not save him or his party from the fallout that is building inexorable pressure on the union itself in the year ahead, with polls showing majorities now in favour of Scottish independence.

The EU, after a hesitant start, has managed increasingly to pull together on the pandemic, and agreed in July to an unprecedented collective recovery package of €750 billion based for the first time on the issuance of debt by the commission. The approval of new economic muscle, a total package of €1.8 trillion including the hard fought seven-year budget, marks an important and ambitious evolution of economic union at a time when its leaders are determined to show that there is life after Brexit. On the EU’s eastern border, a sign of hope was the first tentative act in the removal of Belarus dictator Alexander Lukashenko by the country’s put-upon people.