The Irish Times view on Ireland on the UN Security Council: Knowing when to speak up 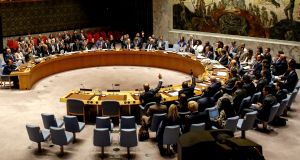 Even the permanent five have limited control over the Un security council’s focus areas, which naturally reflect the global news agenda and can be thrown off course by unexpected events. Photograph: Kena Betancu / AFP via Getty Images

Managing expectations for Ireland’s two-year term on the United Nations security council should not be too difficult. Given the council’s design flaws – the vetoes of its five permanent members in particular – as well as the intractable nature of its most pressing agenda items and Ireland’s relatively slight frame on the global stage, few expect the State to break new ground or even make much headway on its signature issues during its tenure, which begins this month. Even the permanent five have limited control over the council’s focus areas, which reflect the global news agenda and can be thrown off course by unexpected events.

The Government has tacitly acknowledged the constraints it faces by focusing less on any specific policies it plans to pursue than on the more nebulous qualities it will bring to discussions. Ireland will be “a catalyst for more consensus building”, says Minister for Foreign Affairs Simon Coveney, and will “explore and develop middle ground positions”. Its aim will be to play the role of honest broker and “make this work for ourselves and on behalf of everyone who voted for us”, says UN ambassador Geraldine Byrne Nason.

The State undoubtedly brings an important outlook to the table. Its non-aligned status, its EU membership and its experiences in key areas for the UN – peacekeeping, conflict negotiation, development and others – will certainly be of value. The Biden presidency will make the council a little more amenable to Ireland on some (but not all) of the issues it holds dear.

But for two years, security council membership will give Ireland a louder voice on the world stage, and that opportunity should be used to speak up on issues that the country cares about. Whether it is in defence of Palestinian rights or in anger at global inaction on the climate crisis, the Government has a duty to make that voice heard. Helping to find a middle ground in back-room negotiations is one part of the role. But there will be times when Ireland must be prepared to annoy its fellow members by speaking out on contentious issues where it has a firm opinion.